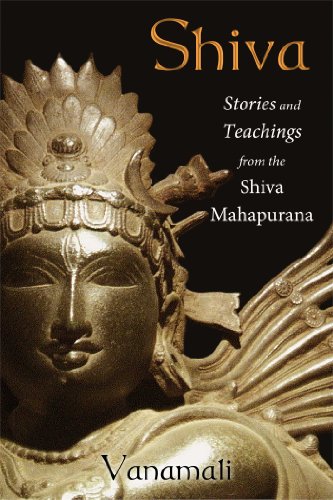 Shiva: Stories and Teachings from the Shiva Mahapurana

About Shiva: Stories And Teachings From The Shiva

Product Description The traditional understanding of Shiva told through stories and teachings from the Shiva Mahapurana • Explains Shiva’s contradictory forms, such as destroyer or benefactor, and how his form depends on the needs of the devotee • Reveals how Shiva’s teachings allow one to see through the illusions at the root of all grief and alienation in human life • Explores Shiva’s relationships with Durga, Shakti, Sati, and Parvati and with his sons Ganesha and Kartikeya Shiva, the most ancient and complex deity of the Hindu pantheon, has been portrayed in many contrasting lights: destroyer and benefactor, ascetic and householder, wild demon slayer and calm yogi atop Mount Kailash. Drawing from the Hindu sacred text the Shiva Mahapurana--said to be written by Shiva himself--Vanamali selects the essential stories of Shiva, both those from his dark wild side and those from his benevolent peaceful side. Vanamali discusses Shiva’s many avatars such as Shambunatha and Bhola, as well as Dakshinamurti who taught the shastras and tantras to the rishis. She explores Shiva’s relationships with Durga, Shakti, Sati, and Parvati and with his sons Ganesha and Kartikeya. Examining Shiva’s acceptance of outsiders, Vanamali explains why ghosts and ghouls are his attendants and why his greatest devotees are demon kings, like Ravana. She includes famous Shiva stories such as the Descent of the River Ganga and Churning the Milky Ocean as well as those that reveal the origin of the festival of lights, Diwali; his creation of the cosmic couple, or hierogamos; and how Shiva and Parvati taught the world the secrets of Kundalini Shakti. The author also draws upon Shaivite teachings to illustrate the differences between Western science and Vedic science and their explanations for the origins of consciousness. Integrating Shiva’s two sides, the fierce and the peaceful, Vanamali reveals that Shiva’s form depends on the needs of the devotee. Understanding his teachings allows one to see through the illusions at the root of all grief and alienation in human life, for Shiva is the wielder of maya who does not fall under its spell. While Ganesha is known as the remover of obstacles, Shiva is the remover of tears. Review "Vanamali’s passionate writing blends a grandmother’s loving wisdom with a lifetime of devotion to the Sanatana Dharma. Like an ancient vedic chant, Vanamali’s spellbinding prose elevates the reader to sublime Himalayan peaks of Transcendental Consciousness. Mataji’s erudition and devotion is a portal to a legendary realm of the Gods.", Bruce Burger, founder of Heartwood Institute and author of Esoteric Anatomy: The Body as Consciousne “Shiva is a complex Hindu deity. Both destroyer and creator, he is always energetically involved in the world, bringing his special wisdom to us in whatever form we might recognize. Vanamali has gathered together the sacred tales of Shiva’s adventures for this book, recounting them with reverence and insight. Customers will begin to see their lives and their potential with greater clarity as they read her carefully crafted words.”, Retailing Insight, October 2013 “Vanamali’s book is seductive, full of the charm of myth retold with sincerity and with a minimum of intellectualization; it should appeal to many school and college collections.”, Library Journal, November 2013 About the Author Mataji Devi Vanamali has written seven books on the gods of the Hindu pantheon, including Hanuman, The Play of God, The Song of Rama, and Shakti, as well as translating the Bhagavad Gita. She is the founder and president of Vanamali Gita Yogashram, dedicated to sharing the wisdom of Sanatana Dharma and charitable service to children. She lives at the Vanamali ashram at Rishikesh in northern India. Excerpt. © Reprinted by permission. All rights reserved. Kripaanidaye Namaha! Chapter 22 The Manifestations of Shiva Be attached to Him, who is without attachment. Hold on to that attachment. Then only will you be able to leave

Shakti: Realm Of The Divine Mother

Hanuman: The Devotion And Power Of The Monkey God

₱ 1,780.00
Pre-order Item
I confirm to purchase this pre-order item.
Other Choices
Return Policy
For more details please visit our page about Cancellations, Returns, and Refunds