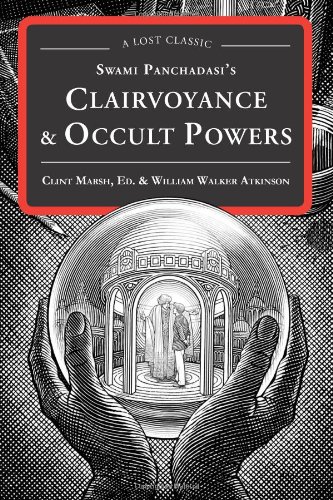 About Swami Panchadasi's Clairvoyance And Occult

Product description Curious about pasttime clairvoyance and clairvoyance of distant scenes? Interested in developing your astral senses and gaining personal psychic influence over others? Then join Swami Panchadasi for twenty lessons in developing the outstanding powers of mentalism! Prepare for your own adventure into worlds beyond our everyday perceptions with Swami Panchadasi's Clairvoyance and Occult Powers. First published in 1916, this metaphysical classic by occultism pioneer William Walker Atkinson's guru Swami Panchadasi (who, it turns out, was actually Atkinson writing under a pseudonym) offers training for anyone to master a range of telepathic talents. From crystal gazing to clairvoyant reverie, psychic healing to astral travel, transference, and psychometry, the lessons are sure to delight student and adept alike. The introduction by Clint Marsh, author of The Mentalist's Handbook, takes us into the strange and multifaceted life of William Walker Atkinson, a turnofthecentury writer, occultist, and a real Guru's guru! A powerful book of knowledge, Clairvoyance and Occult Powers will manage to confound and enchant readers today as it did nearly 100 years ago. Review "Swami Panchadasi, a.k.a. William Walker Atkinson, was an attorney, businessman, occultist, and New Thought pioneer. The twenty lessons in psychic development contained in Clairvoyance & Occult Powers are as relevant today as they were when they were written, a hundred years ago. Swami Panchadasi is just one of many, many pseudonyms used by Atkinson. Clint Marsh, in his introduction to the book, attempts to unravel the tapestry of smokescreens created by Atkinson about his life and work, telling us that, among other things, Atkinson is most likely the author of The Kybalion. Atkinson's prolific output helped to spawn a steady stream of motivational;prosperity authors that leads all the way forward to Ronda Byrne and Esther and Jerry Hicks.Atkinson was ahead of his time in writing for an audience with shortened attention spans and for those seeking personal experience of the transcendental as opposed to hierarchical religious practice. Many of the books penned by Atkinson as Yogi Ramacharaka are still popular in New Age circles., and don't forget Marsh's The Mentalist's Handbook when looking for display ideas." Anna Jedrziewski, New Age Retailer, Reviews About the Author William Walker Atkinson (18621932) was an American writer, merchant, attorney, publisher, and occultist. He was a pioneer of the New Thought and Prosperity Consciousness movements, and wrote dozens of books on various aspects of learning mentalism, psychic power development, and clairvoyance. He wrote Clairvoyance and Occult Powers under the guise of Swami Panchadasi, one of several pseudonyms. Clint Marsh is a writer and publisher of practical esoterica. He has served as Reginald Bakeley's American editor since 1998, and maintains a website at www.wonderella.org.

The Astral World: Its Scenes, Dwellers, And Phenom...

Before
₱ 978.00
Pre-order Item
I confirm to purchase this pre-order item.
Big Discount!
This product, Swami Panchadasi's Clairvoyance and Occult Powers: A Lost Classic, is currently discounted at 45% off! We don't know when it will go back to its original price so order now to secure it at this price! We'll make sure to order it immediately!
Other Choices
Return Policy
For more details please visit our page about Cancellations, Returns, and Refunds
×
Announcement