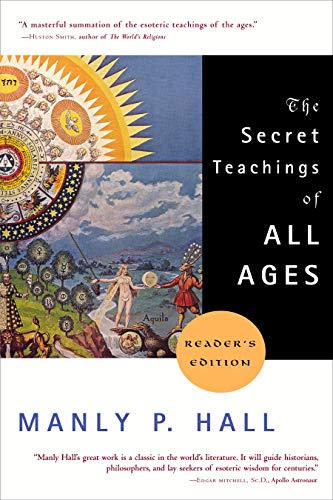 The Secret Teachings of All Ages (Reader's Edition)

The Secret Teachings of All Ages Features

About The Secret Teachings Of All Ages

Product Description A classic since 1928, this masterly encyclopedia of ancient mythology, ritual, symbolism, and the arcane mysteries of the ages is available for the first time in a compact "reader's edition." Like no other book of the twentieth century, Manly P. Hall's legendary The Secret Teachings of All Ages is a codex to the ancient occult and esoteric traditions of the world. Students of hidden wisdom, ancient symbols, and arcane practices treasure Hall's magnum opus above all other works. While many thousands of copies have sold since its initial publication in 1928, The Secret Teachings of All Ages has previously been available only in oversized, expensive editions. For the first time, Hall's celebrated classic is now published in an affordable trade paperback volume. Literally hundreds of entries shine a rare light on some of the most fascinating and closely held aspects of myth, religion, and philosophy from throughout the centuries. More than one hundred line drawings and a sixteen-page color insert reproduce some of the finest illustrations of the original book, while reset and reformatted text makes this edition of The Secret Teachings of All Ages newly accessible to readers everywhere. From Publishers Weekly In 1928, a 20-something Renaissance man named Manly Hall self-published a vast encyclopedia of the occult, believing that "modern" ideas of progress and materialism were displacing more important and ancient modes of knowledge. Hall's text has become a classic reference, dizzying in its breadth: various chapters explore Rosicrucianism, Kabbalah, alchemy, cryptology, Tarot, pyramids, the Zodiac, Pythagorean philosophy, Masonry and gemology, among other topics. This affordably priced edition would be vastly improved by a new foreword, placing the work in some kind of historical and critical context and introducing readers to the basic contours of Hall's sweeping corpus. Instead, we have a disciple's adulatory 1975 foreword, which merely parrots the same themes of mystery and esoterica that are espoused in the book. Readers who are unfamiliar with Hall's work will be at a loss in ferreting out which chapters have stood the test of time and which have been vigorously debunked (like the one on Islam, which actually uses novelist Washington Irving as a primary source on the prophet Muhammad). However, they will also marvel at the sheer scope of Hall's research and imagination, and at J. Augustus Knapp's famous illustrations, including a 16-page color insert. Copyright 2003 Reed Business Information, Inc. Review "A masterful summation of the esoteric teachings of the ages." About the Author Manley P. Hall (1901-1990), widely regarded as a sage and teacher steeped in the wisdom of antiquity, was one of the leading esoteric scholars of the twentieth century. The author of the landmark work The Secret Teachings of All Ages, Hall was named a 33° Mason in 1973. It is the highest rank Freemasonry can bestow.

The Pineal Gland: The Eye Of God

The Secret Destiny Of America

Before
₱ 1,112.00
Pre-order Item
I confirm to purchase this pre-order item.
Other Choices
Return Policy
For more details please visit our page about Cancellations, Returns, and Refunds