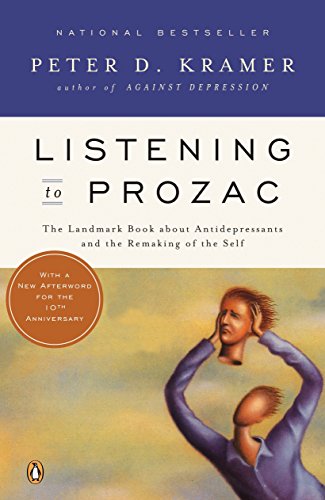 Listening to Prozac: The Landmark Book About Antidepressants and the Remaking of the Self, Revised Edition

About Listening To Prozac: The Landmark Book About

Product Description Since it was introduced in 1987, Prozac has been prescribed to nearly five million Americans. But what is Prozac? A medication or a mental steroid? A cure for depression, or a drug that changes personality? Reported to turn shy people into social butterflies and to improve work performance, memory, even dexterity, does Prozac work on character rather than illness? Are we using it cosmetically, to make people more attractive, more energetic, more socially acceptable? And what does it tell us about the nature of character and the mutability of self? With the addition of an afterword that gives us an up-to-date report on Prozac in America today, including his personal observations, reactions to his critics, and the latest scientific research, psychiatrist Peter Kramer reinforces what The New York Times calls 'an intelligent and informative book...which tells us new things about the chemistry of human character.' Dr. Kramer was recently asked to guest host The Infinite Mind, a weekly public radio show focusing on the art and science of the human mind and spirit, behavior, and mental health. Listen to the show now. Amazon.com Review Psychiatrist Peter Kramer's book Listening to Prozac created a sensation when it was released in 1993, and it remains the most fascinating look at the new generation of antidepressants. Kramer found that the changes in brain chemistry brought about by Prozac had a wide variety of effects, often giving users greater feelings of self-worth and confidence, less sensitivity to social rejection, and even a greater willingness to take risks. He cites cases of mildly depressed patients who took the drug and not only felt better but underwent remarkable personality transformations--which he (along with many of the book's readers) found disconcerting, leading him to question whether the medicated or unmedicated version was the person's "real" self. Kramer has been criticized for seeming to advocate Prozac over psychotherapy or as a way of achieving personality changes not directly related to the disease of depression, such as improving one's social confidence or job performance. In fact, he makes no such recommendations; he was simply the first popular writer to suggest that these changes might occur. (He answers those critics in the afterword to this 1997 edition.) For anyone considering taking antidepressants or wanting a better understanding of the effects these drugs are having on our society, Listening to Prozac is a very important book. About the Author Peter D. Kramer, M.D., recently named host of the national, weekly public radio series, The Infinite Mind, is "possibly the best-known psychiatrist in America," as The New York Times put it. Peter Kramer received his M.D. from Harvard and is the best-selling author of Listening to Prozac, Should You Leave?, Spectacular Happiness, and Moments of Engagement. His latest book, Against Depression, will be published in May 2005. In 2004, two programs of The Infinite Mind hosted by Kramer won top media awards: a Gracie Allen Award from the American Women in Radio and Television for an examination of "Domestic Violence" and a National Mental Health Association Media Award for “Between Two Worlds: Mental Health for Immigrants. Kramer has written for The New York Times Magazine and The New York Times Book Review, The Washington Post Book Review, The Washington Post, the (London) Times Literary Supplement and U.S. News & World Report, among other publications. He lives in Providence, Rhode Island, where he is Clinical Professor of Psychiatry and Human Behavior at Brown University, and has a private practice. Visit Dr. Peter D. Kramer on the web: http://www.peterdkramer.com  The Infinite Mind: http://www.theinfinitemind.com/

Insanity: The Idea And Its Consequences

₱ 1,804.00
Pre-order Item
I confirm to purchase this pre-order item.
Other Choices
Return Policy
For more details please visit our page about Cancellations, Returns, and Refunds