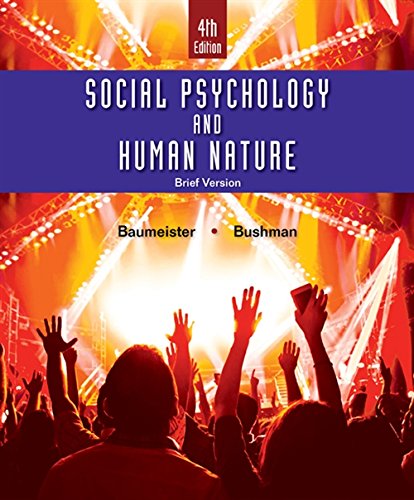 See more product information!
Edition 4
Number Of Pages 688
Package Quantity 1
Publication Date 2016-01-01
-
Save 44%
Before
₱ 6,773
Price Tracker
This item ships longer than average delivery time. Click here to open chat and know how long it will take.
*Used item/s available. *Price and Stocks may change without prior notice
Pay with

Product Description You are a member of a social world on a planet that is home to about 7 billion people. This social world is filled with paradox, mystery, suspense, and outright absurdity. Explore how social psychology can help you make sense of your own social world with this engaging and accessible book. Roy F. Baumeister and Brad J. Bushman's SOCIAL PSYCHOLOGY AND HUMAN NATURE, 4th Edition can help you understand one of the most interesting topics of all -- the sometimes bizarre and baffling but always fascinating diversity of human behavior, and how and why people act the way they do. About the Author Roy F. Baumeister, a professor of psychology at the University of Queensland, Australia, has taught introductory social psychology to thousands of undergraduate students. His teaching and research experience includes appointments at the University of California at Berkeley, Case Western Reserve University, Florida State University, the University of Texas at Austin, the University of Virginia, the Max Planck Institute in Munich (Germany), the VU University, Amsterdam (the Netherlands), King Abdulaziz University (Saudi Arabia), the University of Bamberg (Germany), the University of Melbourne (Australia) and the Center for Advanced Study in the Behavioral Sciences at Stanford. An active researcher whose work has been funded by the National Institutes of Health and the Templeton Foundation, Dr. Baumeister has conducted research on the self (including self-esteem and self-control), the need to belong, sexuality, aggression and how people find meaning in life. In 2005, the Institute for Scientific Information concluded from a survey of published bibliographies that he was among the most influential psychologists in the world (the top 1%) -- a status that has been confirmed several times since then. According to Google Scholar, Dr. Baumeister's works have been cited over 175,000 times in scientific literature. In 2013, he received the William James Award, the highest honor bestowed by the Association for Psychological Science in all of psychology, in recognition of his lifetime achievements and contributions to basic scientific research in psychology. Dr. Baumeister received his Ph.D. from Princeton in 1978. In his (very rare) spare time, he likes to ski and play jazz. Brad J. Bushman is a professor of communication and psychology at The Ohio State University, where he holds the Rinehart Chair of Mass Communication. Previously, he was a professor at the University of Michigan (2003-2010) and Iowa State University (1990-2003). For over 30 years Dr. Bushman has conducted research on aggression and violence. He was a member of President Obama's committee on gun violence, and he has testified before the U.S. Congress about youth violence. His research has challenged several myths (e.g., guns make people safer, venting anger reduces aggression, aggressive people suffer from low self-esteem, violence and sex sell products, media warning labels reduce audience size, exposure to violent media has a trivial effect on aggression). His work earned him the title of "myth buster" from a colleague. Dr. Bushman's research has been published in the top scientific journals (SCIENCE, NATURE, PNAS) and featured extensively in the mass media (BBC, THE NEW YORK TIMES, NPR). His teaching honors include the 2018 G. Stanley Hall Lecture, while his research honors include the Kurt Lewin Award from the Society for the Psychological Study of Social Issues for "outstanding contributions to the development and integration of psychological research and social action" and Distinguished Lifetime Contribution to Media Psychology and Technology from the American Psychological Association in 2014. He and his family live in Columbus, Ohio. In his spare time, he enjoys riding his bicycle and listening to music, especially solo piano, jazz and progressive rock. He earned his Ph.D. from the University of Missouri.

Before
₱ 8,407.00
Pre-order Item
I confirm to purchase this pre-order item.
Big Discount!
This product, Social Psychology and Human Nature, Brief, is currently discounted at 44% off! We don't know when it will go back to its original price so order now to secure it at this price! We'll make sure to order it immediately!
Other Choices
Return Policy
For more details please visit our page about Cancellations, Returns, and Refunds