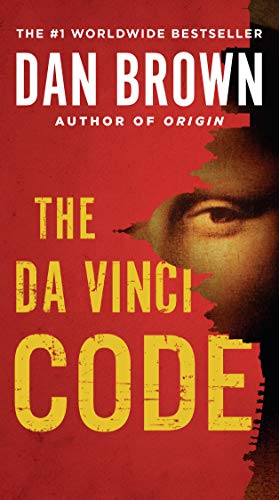 About The Da Vinci Code

Product Description MORE THAN 80 MILLION COPIES SOLDNominated as one of America’s best-loved novels by PBS’s The Great American ReadWhile in Paris, Harvard symbologist Robert Langdon is awakened by a phone call in the dead of the night. The elderly curator of the Louvre has been murdered inside the museum, his body covered in baffling symbols. As Langdon and gifted French cryptologist Sophie Neveu sort through the bizarre riddles, they are stunned to discover a trail of clues hidden in the works of Leonardo da Vinci—clues visible for all to see and yet ingeniously disguised by the painter. Even more startling, the late curator was involved in the Priory of Sion—a secret society whose members included Sir Isaac Newton, Victor Hugo, and Da Vinci—and he guarded a breathtaking historical secret. Unless Langdon and Neveu can decipher the labyrinthine puzzle—while avoiding the faceless adversary who shadows their every move—the explosive, ancient truth will be lost forever. Review "Read the book and be enlightened." — The Washington Post Book World“A pulse-quickening, brain-teasing adventure.” — People“Thriller writing doesn't get any better than this.” — The Denver Post“Blockbuster perfection.”— The New York Times About the Author Dan Brown is the bestselling author of Digital Fortress, Angels & Demons, and Deception Point. He lives in New England. Excerpt. © Reprinted by permission. All rights reserved. 1 Robert Langdon awoke slowly. A telephone was ringing in the darkness--a tinny, unfamiliar ring. He fumbled for the bedside lamp and turned it on. Squinting at his surroundings he saw a plush Renaissance bedroom with Louis XVI furniture, hand-frescoed walls, and a colossal mahogany four-poster bed. Where the hell am I? The jacquard bathrobe hanging on his bedpost bore the monogram: HOTEL RITZ PARIS. Slowly, the fog began to lift. Langdon picked up the receiver. "Hello?" "Monsieur Langdon?" a man's voice said. "I hope I have not awoken you?" Dazed, Langdon looked at the bedside clock. It was 12:32 A.M. He had been asleep only an hour, but he felt like the dead. "This is the concierge, monsieur. I apologize for this intrusion, but you have a visitor. He insists it is urgent." Langdon still felt fuzzy. A visitor? His eyes focused now on a crumpled flyer on his bedside table. THE AMERICAN UNIVERSITY OF PARIS proudly presents An evening with Robert Langdon Professor of Religious Symbology, Harvard University Langdon groaned. Tonight's lecture--a slide show about pagan symbolism hidden in the stones of Chartres Cathedral--had probably ruffled some conservative feathers in the audience. Most likely, some religious scholar had trailed him home to pick a fight. "I'm sorry," Langdon said, "but I'm very tired and--" "Mais monsieur," the concierge pressed, lowering his voice to an urgent whisper. "Your guest is an important man." Langdon had little doubt. His books on religious paintings and cult symbology had made him a reluctant celebrity in the art world, and last year Langdon's visibility had increased a hundred-fold after his involvement in a widely publicized incident at the Vatican. Since then, the stream of self-important historians and art buffs arriving at his door had seemed never-ending. "If you would be so kind," Langdon said, doing his best to remain polite, "could you take the man's name and number, and tell him I'll try to call him before I leave Paris on Tuesday? Thank you." He hung up before the concierge could protest. Sitting up now, Langdon frowned at his bedside Guest Relations Handbook, whose cover boasted: SLEEP LIKE A BABY IN THE CITY OF LIGHTS. SLUMBER AT THE PARIS RITZ. He turned and gazed tiredly into the full-length mirror across the room. The man staring back at him was a stranger--tousled and weary. You need a vacation, Robert. The past year had taken a heavy toll on him, but he didn't appreciate seeing proof in the mirror. His usually sharp blue eyes looked hazy and drawn t