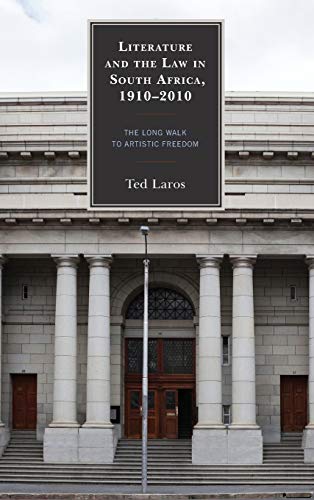 Literature and the Law in South Africa, 1910–2010: The Long Walk to Artistic Freedom (The Fairleigh Dickinson University Press Series in Law, Culture, and the Humanities)

About Literature And The Law In South

Product Description In 1994, artistic freedom pertaining inter alia to literature was enshrined in the South African Constitution. Clearly, the establishment of this right was long overdue compared to other nations within the Commonwealth. Indeed, the legal framework and practices regarding the regulation of literature that were introduced following the nation’s transition to a non-racial democracy seemed to form a decisive turning point in the history of South African censorship of literature. This study employs a historical sociological point of view to describe how the nation’s emerging literary field helped pave the way for the constitutional entrenchment of this right in 1994. On the basis of institutional and poetological analyses of all the legal trials concerning literature that were held in South Africa during the period 1910–2010, it describes how the battles fought in and around the courts between literary, judicial and executive elites eventually led to a constitutional exceptio artis for literature. As the South African judiciary displayed an ongoing orientation towards both English and American law in this period, the analyses are firmly placed in the context of developments occurring concurrently in these two legal systems. Review A thoroughly historicized account of legal positions about the growing institutional autonomy of literature in South Africa. -- Andries Visagie, Professor in Afrikaans literature in the Department of Afrikaans and Dutch, Stellenbosch University Censorship in apartheid-era South Africa was at once crudely repressive and strangely convoluted. When it came to literature this was in part because a small but influential group of censors, mainly literary academics but also some writers, attempted to defend the ideals of an autonomous ‘Republic of Letters’ from within the bureaucracy itself. In his deeply researched study of the longer judicial history of the exceptio artis in South Africa, Ted Laros fills in the legal back story to this fatal compromise, reflects on the complex role the courts played in supporting and limiting it, and considers its afterlife in the legislation underpinning the new South Africa’s constitutional democracy. Literature and Law in South Africa, 1910-2010 is indispensable reading not only for scholars and students interested in the cunning passages of the South African legal history, but for anyone who wishes to gain a better understanding of how the ideals of the European Enlightenment co-existed with, and sometimes abetted, the brutal exercise of power in the age of empire. -- Peter D. McDonald, author of The Literature Police: Apartheid Censorship and its Cultural Consequences (Oxford, 2009) When does the unspeakable become sayable because it is said within the context of art? Ted Laros`s study of Apartheid and post-Apartheid censorship trials demonstrates how the literary field is constructed as one that lies outside the scope of legal censorship, which marks a decisive moment in the volatile relationship between law and literature. His study shows that this moment differs depending on the legal system and legal culture in which it occurs. It therefore addresses the changing racial and legal politics of South Africa to show how the autonomization of the literary field interacted with the state's changing conceptualization of itself. -- Greta Olson, general editor of the European Journal of English Studies, co-founder of the European Network for Law and Literature Research, and professor of English and American Literary and Cultural Studies at the University of Giessen, Germany About the Author Ted Laros is assistant professor of literary studies at the Open University of the Netherlands.

Win The Claim Game: An Insider's Guide To A Succes...

The Case Against Impeaching Trump

The ABA Consumer Guide To Asset Protection: A Step...

Before
₱ 20,590.00
Pre-order Item
I confirm to purchase this pre-order item.
Other Choices
Return Policy
For more details please visit our page about Cancellations, Returns, and Refunds