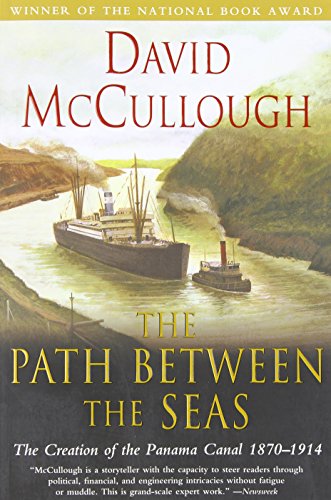 The Path Between the Seas: The Creation of the Features

About The Path Between The Seas: The Creation Of The

Product Description The National Book Award–winning epic chronicle of the creation of the Panama Canal, a first-rate drama of the bold and brilliant engineering feat that was filled with both tragedy and triumph, told by master historian David McCullough. From the Pulitzer Prize–winning author of Truman, here is the national bestselling epic chronicle of the creation of the Panama Canal. In The Path Between the Seas, acclaimed historian David McCullough delivers a first-rate drama of the sweeping human undertaking that led to the creation of this grand enterprise. The Path Between the Seas tells the story of the men and women who fought against all odds to fulfill the 400-year-old dream of constructing an aquatic passageway between the Atlantic and Pacific oceans. It is a story of astonishing engineering feats, tremendous medical accomplishments, political power plays, heroic successes, and tragic failures. Applying his remarkable gift for writing lucid, lively exposition, McCullough weaves the many strands of the momentous event into a comprehensive and captivating tale. Winner of the National Book Award for history, the Francis Parkman Prize, the Samuel Eliot Morison Award, and the Cornelius Ryan Award (for the best book of the year on international affairs), The Path Between the Seas is a must-read for anyone interested in American history, the history of technology, international intrigue, and human drama. Amazon.com Review On December 31, 1999, after nearly a century of rule, the United States officially ceded ownership of the Panama Canal to the nation of Panama. That nation did not exist when, in the mid-19th century, Europeans first began to explore the possibilities of creating a link between the Atlantic and Pacific oceans through the narrow but mountainous isthmus; Panama was then a remote and overlooked part of Colombia. All that changed, writes in his magisterial history of the Canal, in 1848, when prospectors struck gold in California. A wave of fortune seekers descended on Panama from Europe and the eastern United States, seeking quick passage on California-bound ships in the Pacific, and the Panama Railroad, built to serve that traffic, was soon the highest-priced stock listed on the New York Exchange. To build a 51-mile-long ship canal to replace that railroad seemed an easy matter to some investors. But, as McCullough notes, the construction project came to involve the efforts of thousands of workers from many nations over four decades; eventually those workers, laboring in oppressive heat in a vast malarial swamp, removed enough soil and rock to build a pyramid a mile high. In the early years, they toiled under the direction of French entrepreneur Ferdinand de Lesseps, who went bankrupt while pursuing his dream of extending France's empire in the Americas. The United States then entered the picture, with President Theodore Roosevelt orchestrating the purchase of the canal--but not before helping foment a revolution that removed Panama from Colombian rule and placed it squarely in the American camp. The story of the Panama Canal is complex, full of heroes, villains, and victims. McCullough's long, richly detailed, and eminently literate book pays homage to an immense undertaking. --Gregory McNamee Review The Washington Star David McCullough's history of this extraordinary construction job between the Atlantic and Pacific is everything history ought to be. It is dramatic, accurate...and altogether gripping. The Washington Post Book World Solid, entertainingly written and fair-minded...McCullough unravels the complicated and sometimes deliberately obscured story that lies behind the Panama Canal. Christopher Lehmann-Haupt The New York Times A chunk of history full of giant-sized characters and rich in political skullduggery. The New York Daily News In the hands of McCullough, the digging of the great ditch becomes a kind of peacetime epic...The book will absorb you...You won't want to put it down once you've st