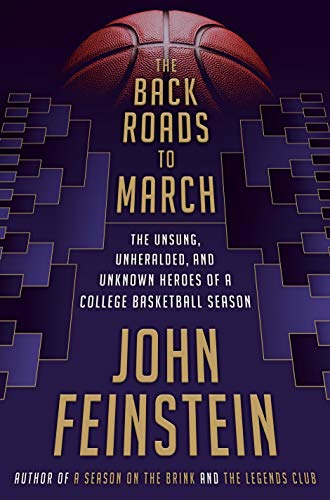 The Back Roads to March: The Unsung, Unheralded, and Unknown Heroes of a College Basketball Season

About The Back Roads To March: The

Product Description Thirty years ago after changing the sports book landscape with his mega-hit, A Season on the Brink, #1 New York Times bestselling author John Feinstein returns to his first love--college basketball--with a fascinating and compelling journey through a landscape of unsung, unpublicized and often unknown heroes of Division-1 college hoops.      John Feinstein has already taken readers into the inner circles of top college basketball programs in The Legends Club. This time, Feinstein pulls back the curtain on college basketball's lesser-known Cinderella stories--the smaller programs who no one expects to win, who have no chance of attracting the most coveted high school recruits, who rarely send their players on to the NBA.      Feinstein follows a handful of players, coaches, and schools who dream, not of winning the NCAA tournament, but of making it past their first or second round games. Every once in a while, one of these coaches or players is plucked from obscurity to continue on to lead a major team or to play professionally, cementing their status in these fiercely passionate fan bases as a legend. These are the gifted players who aren't handled with kid gloves--they're hardworking, gritty teammates who practice and party with everyone else.      With his trademark humor and invaluable connections, John Feinstein reveals the big time programs you've never heard of, the bracket busters you didn't expect to cheer for, and the coaches who inspire them to take their teams to the next level. Review “Perfect. A wonderful book by a wonderful sports journalist.” --Booklist (starred review) "In this fascinating history, sportswriter Feinstein ( A Season on the Brink) takes a look at lesser-known college basketball teams. In order to explore the 'real joys of college basketball,' Feinstein eschews the big money and future NBA stars of celebrated universities to focus on the sheer love of the game that characterizes smaller schools, covering the 2018 basketball season from November to the March playoffs. . . It’s all net for Feinstein’s passionate basketball history." --Publishers Weekly (starred review) "Rousing . .  . The author is a sympathetic observer, fan, reporter, and scholar all at once, and he delivers reams of information about how the game has evolved . . . Feinstein writes with warmth and enthusiasm of a beloved sport in a book that will grab any fan." --Kirkus About the Author JOHN FEINSTEIN is the #1 New York Times bestselling author of the classic sports books A Season on the Brink and A Good Walk Spoiled, along with many other bestsellers including Quarterback, The Legends Club, Where Nobody Knows Your Name and The First Major. He currently writes for The Washington Post, Golf Digest, and Golf World, and does commentary on the CBS Sports Radio Network. Excerpt. © Reprinted by permission. All rights reserved. As soon as the buzzer sounded, I closed my computer. Ever helpful, the NCAA had put out its one millionth printed statement of Final Four weekend prior to the start of the game, warning all of us in the media that confetti would come pouring out of U.S. Bank Stadium’s ceiling as soon as the national championship game ended.  Sure enough here it came, and I quickly closed the computer so as not to have to spend several minutes picking confetti from the keys. Not my first rodeo. It was 10:40 central time in Minneapolis—11:40 in the east—and, as was always the case on Monday night, time was precious.  For a moment, while waiting to be able to safely open the computer and resume writing, I flashed back nine years to another Monday night. There were thirty-one seconds left in the NCAA championship game between Duke and Butler, and the Bulldogs had the ball and had just called a time-out, trailing 60–59.  Ohio State athletic director Gene Smith, who was that year’s chairman of the NCAA basketball committee, was sitting to my left. As the buzzer sounded to end the time-out, Smit

Where Nobody Knows Your Name: Life In The Minor Le...

Before
₱ 1,232.00
Pre-order Item
I confirm to purchase this pre-order item.
Other Choices
Return Policy
For more details please visit our page about Cancellations, Returns, and Refunds