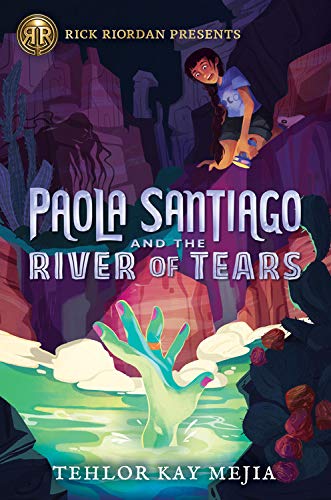 Paola Santiago and the River of Tears (Rick Riordan Presents)

About Paola Santiago And The River Of Tears

Product Description Best-selling author Rick Riordan presents author Tehlor Kay Mejia and her thrilling fantasy adventure based on the Mexican legend of La Llorona (the Crying Woman). Space-obsessed 12-year-old Paola Santiago and her two best friends, Emma and Dante, know the rule: Stay away from the river. It's all they've heard since a schoolmate of theirs drowned a year ago. Pao is embarrassed to admit that she has been told to stay away for even longer than that, because her mother is constantly warning her about La Llorona, the wailing ghost woman who wanders the banks of the Gila at night, looking for young people to drag into its murky depths. Hating her mother's humiliating superstitions and knowing that she and her friends would never venture into the water, Pao organizes a meet-up to test out her new telescope near the Gila, since it's the best stargazing spot. But when Emma never arrives and Pao sees a shadowy figure in the reeds, it seems like maybe her mom was right. . . . Pao has always relied on hard science to make sense of the world, but to find her friend she will have to enter the world of her nightmares, which includes unnatural mist, mind-bending monsters, and relentless spirits controlled by a terrifying force that defies both logic and legend. "This fast-paced journey into Latinx folklore, with its clever protagonist, is sure to keep readers turning pages into the night." - Booklist (starred review) From School Library Journal Gr 5-8-Twelve-year-old Paola "Pao" Santiago lives in Silver Springs, AZ, with her besties Dante and Emma. Her mother strongly believes in ancestor ghosts and regional legends like La Llorona, a weeping ghost who drowns her victims in the Gila River. Pao appreciates science and evidence, a position she must question when Emma disappears. Pao and Dante search for her in a magical hinterland, where their dream guide Ondina steers them past frightening chupacabras and ghost children ahogados. They reach a camp with immortal child warriors who defend Silver Springs but fear an overwhelming assault. Pao departs the camp to find Emma, facing a battle with the ghosts' puppet master. Mejia's Mexican American myth succeeds both as an extended quest and a humorous contemporary story. Her real genius lies, however, in detailed yet effortless characterization. It takes mere pages before readers will know and love Pao. Pao is both a pragmatist and a dreamer. Her loyalty to Emma and her changing feelings for Dante feel well integrated with the action. Minor characters like Ondina and the camp children have stand-out moments. And who can resist Pao's acquisition of a demon hound? Character development, the Southwestern setting, and action share story space without seeming rushed. Spanish phrases, like those Dante's abuela uses to advise the children, are understandable to non-Spanish speakers in context. Readers may wonder why the unwed mother in the folktale is shunned and could benefit from a grown-up's explanation. VERDICT A warm, thrilling Mexican American adventure. An essential purchase.-Caitlin Augusta, Stratford Lib. Assoc., CTα(c) Copyright 2011. Library Journals LLC, a wholly owned subsidiary of Media Source, Inc. No redistribution permitted. Review *"This fast-paced journey into Latinx folklore, with its clever protagonist, is sure to keep readers turning pages into the night."― Booklist (starred review) About the Author TEHLOR KAY MEJIA is the author of the critically acclaimed young adult fantasy novel We Set the Dark on Fire, as well as its forthcoming sequel, We Unleash the Merciless Storm, and Miss Meteor (co-written with National Book Award nominee Anna-Marie McLemore). Her debut novel received six starred reviews, and was chosen as an Indie's Next Pick and a Junior Library Guild selection, as well as being an Indiebound bestseller in the Pacific Northwest region. It has been featured in Seventeen, Cosmopolitan, and O by Oprah Magazine's, and named a best b

Before
₱ 1,369.00
Pre-order Item
I confirm to purchase this pre-order item.
Other Choices
Return Policy
For more details please visit our page about Cancellations, Returns, and Refunds