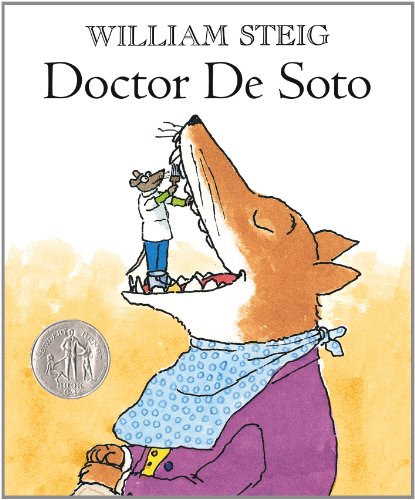 Product Description A Newbery Honor Book from the creator of Shrek. "Doctor De Soto, the dentist, did very good work." With the aid of his able assistant, Mrs. De Soto, he copes with the toothaches of animals large and small. His expertise is so great that his fortunate patients never feel any pain.Since he's a mouse, Doctor De Soto refuses to treat "dangerous" animals--that is, animals who have a taste for mice. But one day a fox shows up and begs for relief from the tooth that's killing him. How can the kindhearted De Sotos turn him away? But how can they make sure that the fox doesn't give in to his baser instincts once his tooth is fixed? Those clever De Sotos will find a way. Review “I cannot imagine childhood without Steig: Sylvester, Pearl, Caleb, and now Doctor De Soto.” ―The Dallas Morning News“This is one of those picture books that are so good I'd just like to quote the whole thing.” ―Philadelphia Inquirer“Simple but sly, a mischievously imaginative rendition of the classic theme.” ―Kirkus Reviews, Starred Review“Doctor De Soto is a mouse dentist who . . . operates a clinic open to all except animals threatening to mice. What to do, then, when a weeping and wailing fox shows up for treatment? . . . There is great wit and good fun in the illustrations.” ―Booklist, Starred Review About the Author William Steig (1907-2003) was a cartoonist, illustrator and author of award-winning books for children, including Shrek!, on which the DreamWorks movies are based. Steig was born in New York City. Every member of his family was involved in the arts, and so it was no surprise when he decided to become an artist. He attended City College and the National Academy of Design. In 1930, Steig’s work began appearing in The New Yorker, where his drawings have been a popular fixture ever since. He published his first children's book, Roland the Minstrel Pig, in 1968. In 1970, Steig received the Caldecott Medal for Sylvester and the Magic Pebble. His books for children also include Dominic; The Real Thief; The Amazing Bone, a Caldecott Honor Book; Amos & Boris, a National Book Award finalist; and Abel's Island and Doctor De Soto, both Newbery Honor Books. Steig's books have also received the Christopher Award, the Irma Simonton Black Award, the William Allen White Children's Book Award, and the American Book Award. His European awards include the Premio di Letteratura per l'infanzia (Italy), the Silver Pencil Award (the Netherlands), and the Prix de la Fondation de France. On the basis of his entire body of work, Steig was selected as the 1982 U.S. candidate for the Hans Christian Andersen Medal for Illustration and subsequently as the 1988 U.S. candidate for Writing. Steig also published thirteen collections of drawings for adults, beginning with About People in 1939, and including The Lonely Ones, Male/Female, The Agony in the Kindergarten, and Our Miserable Life. He died in Boston at the age of 95.

Sylvester And The Magic Pebble