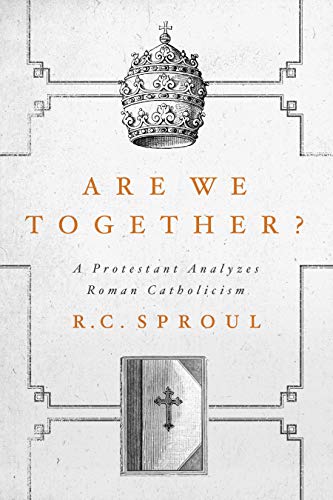 Are We Together?: A Protestant Analyzes Roman Catholicism

Are We Together?: A Protestant Analyzes Roman Features

About Are We Together?: A Protestant Analyzes Roman

Product Description In recent years, some evangelical Protestant leaders have signed statements pledging themselves to joint social action with Roman Catholics. Others have refused to participate, declaring that, in their view, the statements went too far, touching on the gospel, which remains a point of disagreement between Protestants and Roman Catholics. Many evangelical Christians have found themselves confused by the different directions taken by their leaders. In Are We Together? A Protestant Analyzes Roman Catholicism, R.C. Sproul takes his stand for the cardinal doctrines of Protestantism in opposition to the errors of the Roman Catholic Church. Sproul, a passionate defender of the gospel of justification by grace alone through faith alone in Christ alone, cites the historic statements of the Protestant Reformers and the Roman Catholic authorities, then references modern doctrinal statements to show that the Roman Catholic Church has not altered its official positions. In light of this continuing gap, he writes, efforts by some in the evangelical camp to find common ground with Rome on matters at the heart of the gospel are nothing short of untrue to biblical teaching. In Sproul’s estimation, the Reformation remains relevant. Are We Together? is a clarion call to evangelicals to stand firm for the gospel, the precious good news of salvation as it is set forth in Scripture alone. Review “R.C. Sproul covers the issues candidly and objectively—without the emotion and demagoguery that so often pervade the abortion debate. You are the jury; you decide the verdict.” -- Dr. John MacArthur “Classic Sproul! Logical, clear, fair, attempting to understand the pro-choice views while all the time making a solid, biblical pro-life apologetic that seeks both to convince the opponents but also to bring about in practical ways the end of this North American holocaust. Add to that the foreword of George Grant and you have a winner.” -- Dr. Peter Jones “This is an important book for all Christians interested in bringing their beliefs to bear upon the world around them. Abortion is one of the most critical issues of our day, and R.C. Sproul looks at it through the lenses of theology, philosophy, and reason. This book is refreshingly free of hyperbole, and yet does not compromise the truth.” -- Jim Daly “R.C. Sproul’s rapier logic will put to flight rationalistic defenders of abortion. Those torn between conflicting claims about the humanity of the unborn, the role of government, and the rights of women will find this book particularly instructive.” -- Marvin Olasky “R.C. Sproul’s book on abortion is a classic text in the evangelical witness against the culture of death. I pray this Twentieth Anniversary Edition will awaken a new generation of Christians to the joyful duty of protecting the ‘least of these,’ our Lord Jesus’ unborn brothers and sisters.” -- Russell D. Moore “Staying silent on the issue of abortion is no longer an option. It is time for those who are respected and capable to speak out and say it straight. I know of no one who qualifies better than R.C. Sproul.” -- Chuck Swindoll “I am delighted to see this Twentieth Anniversary Edition of Abortion: A Rational Look at an Emotional Issue. It was and continues to be an important contribution to the pro-life movement and to the defense of the sanctity of human life.” -- John Jefferson Davis About the Author Dr. R.C. Sproul (1939–2017) was founder of Ligonier Ministries, an international Christian discipleship organization located near Orlando, Fla. He was also founding pastor of Saint Andrew’s Chapel in Sanford, Fla., first president of Reformation Bible College, and executive editor of Tabletalk magazine. His radio program, Renewing Your Mind, is still broadcast daily on hundreds of radio stations around the world and can also be heard online. Dr. Sproul contributed dozens of articles to national evangelical publications, spoke at conferen

The Gospel According To Rome: Comparing Catholic T...

Roman Catholicism: What You Need To Know (Quick Re...

₱ 455.00
Pre-order Item
I confirm to purchase this pre-order item.
Other Choices
Return Policy
For more details please visit our page about Cancellations, Returns, and Refunds