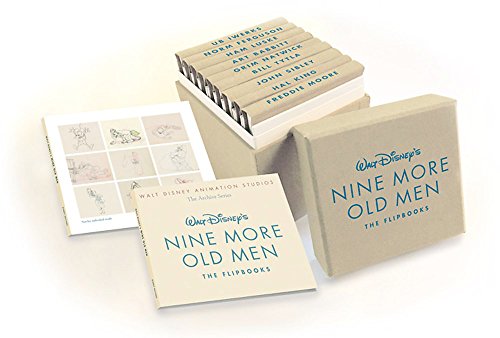 Product Description There are nine flip books inside this box that pays tribute to Disney's early animators. Legendary animators Ub Iwerks, Norm Ferguson, Billl Tytla, Ham Luske, Art Babbitt, Grim Gatwick, Freddie Moore, Hal King, and John Sibley are featured in this special set. Each flipbook features a scene from an animated Disney feature in its original line-drawn form, having been selected from among a wide range of films for great movement and classic characters. In addition to the filpbooks, the box contains a booklet detailing the incredible talents that the animators contributed to The Walt Disney Animation Studios, for which they have all been named Disney Legends. With their enduring appeal, precise timing, and focused staging, it's no wonder the films created by these animation pioneers have been enjoyed by generation after generation. Review PRAISE FOR WALT DISNEY'S NINE MORE OLD MEN: THE FLIPBOOKS "Docter doesn't make a big deal about his knowledge of the art form, but he is a first-class historian." ― Cartoon Brew PRAISE FOR WALT DISNEY ANIMATION STUDIOS: THE ARCHIVE SERIES-WALT DISNEY'S NINE OLD MEN: THE FLIPBOOKS "This pet project of UP director Pete Docter is among the more unique book concepts, and pays tribute to the work of the Nine Old Men in the best way possible: by displaying scenes their animation work. Amazingly, none of the Nine Old Men's full animation scenes have been made available to the public before, which makes this both a valuable historical and educational project. There's no better choice than Docter to spearhead the project; he's a big fan of the flipbook format and creates a flipbook ever year as his personal Christmas card. ― Cartoon Brew PRAISE FOR WALT DISNEY ANIMATION STUDIOS: THE ARCHIVE SERIES-ANIMATION One of "Ten Essential Books for Animation Students and Fans"― Animation Magazine PRAISE FOR MARC DAVIS IN HIS OWN WORDS: IMAGINEERING THE DISNEY THEME PARKS ". . . visually stunning. As far as content, what better way to learn from a master than in their own words?"― Business Insider PRAISE FOR MARC DAVIS IN HIS OWN WORDS: IMAGINEERING THE DISNEY THEME PARKS One of "20 Books Every True Disney Fan Should Have in Their Collection"― POPSUGAR About the Author Pete Docter is an American film director, animator, and screenwriter from Bloomington, Minnesota. He is best known for directing Inside Out, Monsters, Inc., and Up and as a key figure and collaborator in Pixar Animation Studios. The A.V. Club has called him "almost universally successful." He has been nominated for six Oscars (two wins thus far for Up and Inside Out-- Best Animated Feature), three Annie Awards (two wins), a BAFTA Children's Film Award (which he won), and a Hochi Film Award (which he won). He has described himself as a "geeky kid from Minnesota who likes to draw cartoons."

Before
₱ 3,091.00
Pre-order Item
I confirm to purchase this pre-order item.
Other Choices
Return Policy
For more details please visit our page about Cancellations, Returns, and Refunds