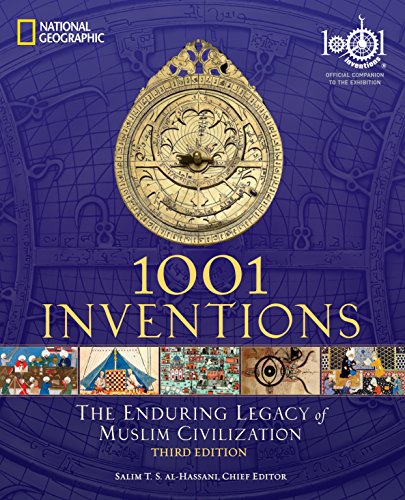 About 1001 Inventions: The Enduring Legacy Of Muslim

Product description 1001 Inventions: The Enduring Legacy of Muslim Civilization takes readers on a journey through years of forgotten Islamic history to discover one thousand fascinating scientific and technological inventions still being used throughout the world today. Take a look at all of the discoveries that led to the great technological advances of our time; engineering, early medicinal practices, and the origins of cartography are just a few of the areas explored in this book. 1001 Inventions provides unique insight into a significant time period in Muslim history that has been looked over by much of the world. A time where discoveries were made and inventions were created that have impacted how Western civilization and the rest of the world lives today. The book will cover seven aspects of life relatable to everyone, including home, school, hospital, market, town, world and universe. Review "...this heavily illustrated volume, edited by Salim T.S. Al-Hassani, stands on its own as an accessible history of the golden era that spanned from the 7th to the 17th century." -- Boston Sunday Globe About the Author THE FOUNDATION FOR SCIENCE TECHNOLOGY AND CIVILIZATION (FSTC) is a United Kingdom-based educational entity which was formed to popularize, disseminate and promote an accurate account of Muslim Heritage and its contribution to present day science, technology and civilization. As well as owning, developing and maintaining MuslimHeritage.com, FSTC has produced publications, conferences and teacher training seminars on the subject. Excerpt. © Reprinted by permission. All rights reserved. On the Coffee Trail More than 1.5 billion cups of coffee are drunk worldwide every day—enough to fill nearly 300 Olympic-size swimming pools. If you do not have a jar of coffee in your kitchen, you are in a minority. Coffee is a global industry and the second largest commodity-based product; only oil beats it. More than 1,200 years ago hardworking people fought to stay awake without this stimulant until, as the story goes, a herd of curious goats and their watchful master, an Arab named Khalid, discovered this simple, life- changing substance. As his goats grazed on the Ethiopian slopes, he noticed they became lively and excited after eating a particular berry. Instead of just eating the berries, people boiled them to create al-qahwa. Sufis in Yemen drank al-qahwa for the same reasons we do today, to stay awake. It helped them to concentrate during late night Thikr (prayers in remembrance of Allah). Coffee was spread to the rest of the Muslim world by travelers, pilgrims, and traders, reaching Mecca and Turkey in the late 15th century and Cairo in the 16th century. It was a Turkish merchant named Pasqua Rosee who first brought coffee to England in 1650, selling it in a coffeehouse in George-yard, Lombard Street, London. Eight years later, another coffeehouse called Sultaness Head was opened in Cornhill. Lloyd’s of London, today a famous insurance company, was originally a coffee shop called Edward Lloyd’s Coffee House. By 1700, there were about 500 coffeehouses in London, and nearly 3,000 in the whole of England. They were known as “penny universities” because you could listen and talk with the great minds of the day for the price of a coffee. The consumption of coffee in Europe was largely based on the traditional Muslim preparation of the drink. This entailed boiling the mixture of coffee powder, sugar, and water together, which left a coffee residue in the cup because it was not filtered. However, in 1683, a new way of preparing and drinking coffee was discovered, and it became a coffeehouse favorite. Cappuccino coffee was inspired by Marco d’Aviano, a priest from the Capuchin monastic order, who was fighting against the Turks besieg- ing Vienna in 1683. Following the retreat of the Turks, the Viennese made coffee from abandoned sacks of Turkish coffee. Finding it too strong for their taste, they mixed it with cream and honey. This made the color of coffee turn brown, resem- bling the color of the Capuchins’ robes. Thus, the Viennese named it cappuccino in honor of Marco D’Aviano’s order. Since then, cappuccino has been drunk for its enjoyable, smooth taste.

The Genius Of Islam: How Muslims Made The Modern W...

Before
₱ 1,188.00
Pre-order Item
I confirm to purchase this pre-order item.
Other Choices
Return Policy
For more details please visit our page about Cancellations, Returns, and Refunds