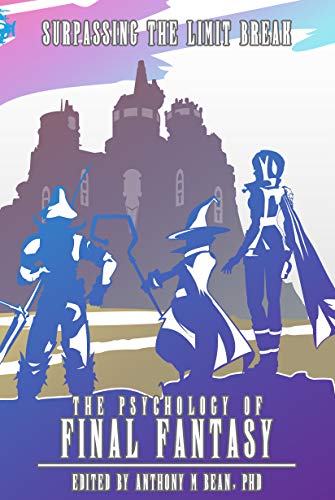 The Psychology of Final Fantasy: Surpassing The Limit Break

The Psychology of Final Fantasy: Surpassing The Features

About The Psychology Of Final Fantasy: Surpassing The

Product Description "No matter how dark the night, morning always comes, and our journey begins anew." - Lulu, Final Fantasy X. From its initial release in 1987, Final Fantasy has gone on to become one of the most beloved series of role-playing games in history. With narratives revolving around grandiose stories of good versus evil, Final Fantasy has allowed us, as players, to witness heroic battles, experience hard-won victories, and create treasured friendships for almost 40 years. The Psychology of Final Fantasy guides gamers on a real-world quest of self-discovery so that they can surpass their own limit break. And, as part of this examination, psychologists, clinicians, video game researchers, professors, and enthusiasts who love this franchise ask: How does the storyline in Final Fantasy grab and keep our attention for so many hours of gameplay? Why do the symbols in the game, such as crystals, magic, and weapons, hold meaning about our own psychological inner workings? What are the feminine warrior and archetypes found in the game and how are they living in all of our everyday lives? How does playing Final Fantasy connect us with a larger sense of spiritual guidance as to who we are? Why is it that, by creating a group, we become whole more than we do when playing as individuals? How do the musical interludes affect our psyche and push us to become better versions of ourselves? Think you know Final Fantasy? The Psychology of Final Fantasy explores how the game resonates with a player's psychological drive toward an emotional sense of wholeness, bonding, and completion as they take part in this epic quest. Review This collection of essays was page after page of nostalgia! Full confession: I didn't actually grow up with Final Fantasy. (We didn't have video games in our house!) I got into video games in college, and FFXIII was one of the first I got to experience. I remember being enthralled by Sazh's chocobo chick, and Lightning's epic battles. Years later, when I met my husband, he introduced me to FFVI...and then FFVII...and then FFX...and eventually FFXIV...which we still play today! We even have a cat named Kain. So, the series holds a special place in my heart, even though I'm relatively new (is ten years new?) to it. If you find yourself firing up your old PS2 every few years to replay the classics, this book absolutely needs to be on your bookshelf. If you ever wondered why so many Final Fantasy characters suffer from amnesia (and if you want to be amazed at how accurately it was depicted), get yourself a copy. If you ever took a psychology class in college and managed to make your final paper about Blade Runner (hey, I got a B on it!), you will adore diving into this book. About the Author Anthony M. Bean, PhD, is a licensed psychologist and executive director at The Telos Project, a nonprofit mental health clinic in Fort Worth, Texas, and an adjunct professor at Framingham State University in Massachusetts. He specializes in the therapeutic implications of video games and gaming, working with children and adolescents, and the use of video-game character identification as a therapeutic technique. He specializes in video games, children & adolescents, and the virtual worlds played in by all ages. He is considered an expert in this growing field, has been published extensively in the discipline. He works with children, adolescents, and adults who play video games and their families to better understand the immersive psychological effects video games have upon the individual and resulting family dynamics. Dr. Bean utilizes video game character identification techniques and other archetypal experiences to understand and develop intrinsic motivations for playing, personal identity, and discovering conscious and unconscious conflicts, cognitions, and behaviors. He has worked with children, adolescents, and adults on discovering their own symbolic transformations through the playing of video

Before
₱ 3,530.00
Pre-order Item
I confirm to purchase this pre-order item.
Other Choices
Return Policy
For more details please visit our page about Cancellations, Returns, and Refunds