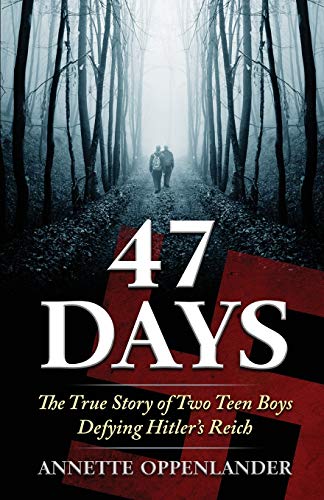 About 47 Days: The True Story Of Two Teen Boys Defying

Product Description "...intriguing and fascinating young adult adventure..." Readers' Favorite '47 DAYS' is a novelette and an excerpt from the award-winning biographical novel, SURVIVING THE FATHERLAND--A True Coming-of-age Love Story Set in WWII Germany.  In March 1945 Hitler ordered his last propaganda command: send all 15 and 16-year old boys to defend the fatherland. 47 DAYS tells the true story of Günter and Helmut, best friends, who dared to defy and disobey. Without knowing how long the war might continue, they spent 47 harrowing days as fugitives on the run. Being caught meant certain execution.SURVIVING THE FATHERLAND tells the true and heart-wrenching stories of Lilly and Günter struggling with the terror-filled reality of life in the Third Reich, each embarking on their own dangerous path toward survival, freedom, and ultimately each other. Based on the author's own family and anchored in historical facts, this story celebrates the resilience of the human spirit and the strength of war children. Review On the run, Günter and Helmut are trying to avoid Hitler's last propaganda command in 1945 of sending 15 and 16-year-old boys to fight for their country. Germany is slowly but surely losing the war when Hitler tries to swing it around to his advantage by ordering elderly men and young teenagers to enlist. Annette Oppenlander's novella, 47 Days: The True Story of Two Teen Boys Defying Hitler's Reich, focuses on Günter and Helmut who, without knowing how much longer the war will last, disobey the command and run away instead of reporting to their destination. If caught, the boys will be executed for desertion. Will they resist or will they eventually give in and join the ranks?  Annette Oppenlander has written an intriguing and fascinating young adult adventure that will have readers rooting for the fugitives during their daring but terrifying act of defiance. Even more suspenseful is the fact that the fate of the boys is not subject to the whim of the author but, by the time of reading, had already played out in 1945. Readers can only pray that 47 Days will have a happy ending. The language is beautifully simple, but descriptive enough for readers to feel as though they have been transported back into some of the scenes and are watching the action live. I thoroughly enjoyed this novella, as will other lovers of historical books, especially those focusing on World War II and Hitler's rampant insanity-driven acts. I look forward to more richly detailed and compelling books from Annette Oppenlander! From the Author Based on my father's experience as a youth in World War II, 47 DAYS takes us into the last months of the war. The 'Reich' is crumbling, but Hitler frantically throws the last warm bodies into battle: old men, the injured and feeble, and all 15- and 16-year old boys. With the Allies and Russians spreading across German soil, it is a wasted effort. Hitler well knows it is too late and that the war is lost. But in his insane mind he justifies discarding the youth of the country. If Germany can't win, they can all go to hell. My father, Günter, and his best friend, Helmut, were among those teens, drafted in March 1945. They were told to travel 200 kilometers south to report to the Hitler Youth Office in Marburg and jointedly defend the fatherland. Without training, without weapons. My father and his friend decided it was a bad idea. They chose to think for themselves and disobey. The prize was their lives because being caught meant certain execution. At the time nobody knew how much longer the war would last. And so the task of hiding and eluding became a race for survival. Not to mention the turmoil Günter and Helmut must have felt every single day. Had they done the right thing? Would they get caught? Well, they almost did. And they almost died. I chose to publish this novelette separately because I wanted to share the conflict and threats these boys endured for disobeying orders. If you are int

Code Talker: A Novel About The Navajo Marines Of W...

₱ 703.00
Pre-order Item
I confirm to purchase this pre-order item.
Other Choices
Return Policy
For more details please visit our page about Cancellations, Returns, and Refunds