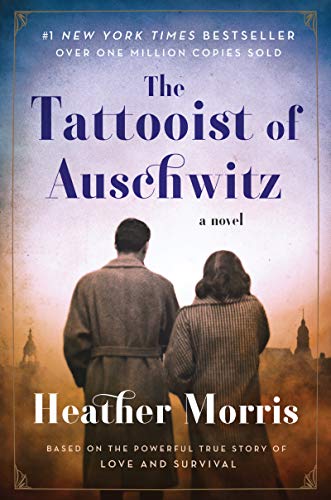 The Tattooist of Auschwitz: A Novel

The Tattooist of Auschwitz: A Novel Features

About The Tattooist Of Auschwitz: A Novel

Product Description  #1 New York Times Bestseller and #1 International Bestseller This beautiful, illuminating tale of hope and courage is based on interviews that were conducted with Holocaust survivor and Auschwitz-Birkenau tattooist Ludwig (Lale) Sokolov—an unforgettable love story in the midst of atrocity. “The Tattooist of Auschwitz is an extraordinary document, a story about the extremes of human behavior existing side by side: calculated brutality alongside impulsive and selfless acts of love. I find it hard to imagine anyone who would not be drawn in, confronted and moved. I would recommend it unreservedly to anyone, whether they’d read a hundred Holocaust stories or none.”—Graeme Simsion, internationally-bestselling author of The Rosie Project In April 1942, Lale Sokolov, a Slovakian Jew, is forcibly transported to the concentration camps at Auschwitz-Birkenau. When his captors discover that he speaks several languages, he is put to work as a Tätowierer (the German word for tattooist), tasked with permanently marking his fellow prisoners. Imprisoned for over two and a half years, Lale witnesses horrific atrocities and barbarism—but also incredible acts of bravery and compassion. Risking his own life, he uses his privileged position to exchange jewels and money from murdered Jews for food to keep his fellow prisoners alive. One day in July 1942, Lale, prisoner 32407, comforts a trembling young woman waiting in line to have the number 34902 tattooed onto her arm. Her name is Gita, and in that first encounter, Lale vows to somehow survive the camp and marry her. A vivid, harrowing, and ultimately hopeful re-creation of Lale Sokolov's experiences as the man who tattooed the arms of thousands of prisoners with what would become one of the most potent symbols of the Holocaust, The Tattooist of Auschwitz is also a testament to the endurance of love and humanity under the darkest possible conditions. Amazon.com Review Based on the real-life experiences of Holocaust survivor Ludwig (Lale) Sokolov, author Heather Morris’s novel is a testament to the human spirit and the power of love to bloom in even the darkest places. And it’s hard to imagine a place darker than the Auschwitz-Birkenau concentration camps. In 1942, Lale is rounded up with other Slovakian Jews and sent to Auschwitz. Once there, he is given the job of tätowierer, inking numbers into the arms of frightened prisoners at a sickening rate. One of these prisoners is a young woman named Gita--and in spite of their plight, they fall in love. Lale’s position as the tätowierer gives him privileges but does not shield him from the brutality of the camps. Time and again he risks his life to help his fellow prisoners, and my heart was in my throat at the chances he took for Gita and others. Despite the passing of years and the ever present threat of death, Lale and Gita never stop believing in a future together where they can live as husband and wife. The Tattooist of Auschwitz is a beautiful and life-affirming novel. Thinking about it still brings tears to my eyes and warmth to my heart. —Seira Wilson, Amazon Book Review Review “To many, this book will be most appreciated for its powerful evocation of the everyday horrors of life as a prisoner in a concentration camp, while others will be heartened by the novel’s message of how true love can transcend even the most hellishly inhuman environments. This is a perfect novel for book clubs and readers of historical fiction.” -- Publishers Weekly “..this is a powerful, gut-wrenching tale that is hard to shake off.” -- Kirkus Reviews “Like the Nobel Prize-winning author Elie Wiesel’s Night, Morris’ work takes us inside the day-to-day workings of the most notorious German death camp. Over the course of three years, Morris interviewed Lale, teasing out his memories and weaving them into her heart-rending narrative of a Jew whose unlikely forced occupation as a tattooist put him in a position to act with kindness and hu

The Librarian Of Auschwitz (Special Edition)

Before
₱ 1,363.00
Pre-order Item
I confirm to purchase this pre-order item.
Big Discount!
This product, The Tattooist of Auschwitz: A Novel, is currently discounted at 44% off! We don't know when it will go back to its original price so order now to secure it at this price! We'll make sure to order it immediately!
Other Choices
Return Policy
For more details please visit our page about Cancellations, Returns, and Refunds