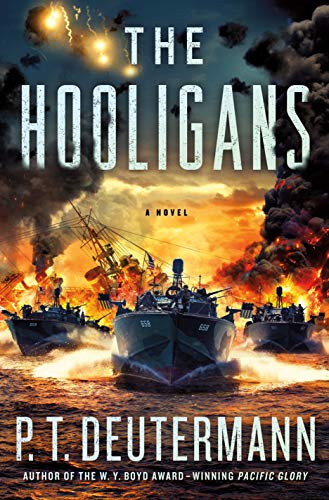 About The Hooligans: A Novel

Product Description A gripping and authentic World War II naval adventure by a master storytellerThe Hooligans fictionalizes the little-known but remarkable exploits of “The Hooligan Navy” that fought in the Pacific theatre of World War II. Loosely-organized in fast moving squadrons, PT (patrol torpedo) boats were the pesky nemesis of the formidable Japanese navy, dubbed “the mosquito fleet” and “devil boats” for their daring raids against warships, tankers, and transport ships.After the Pearl Harbor raid plunges America into war, young surgical resident Lincoln Anderson enlists in the Navy medical corps. His first deployment comes in August 1942 at Guadalcanal, when after a brutal sea battle and the landing of Marines on the island, Anderson finds himself triaging hundreds of casualties under relentless Japanese air and land attacks.But with the navy short of doctors, soon Anderson is transferred to serve aboard a PT boat. From Guadalcanal to the Solomon Islands to the climactic, tide-turning battle of Leyte Gulf, Anderson and the crew members of his boat confront submarines and surface ships, are attacked from air by the dreaded Kawanishi flying boats, and hunted by destroyers. In the end, Anderson must lead a division of boats in a seemingly-impossible mission against a Japanese battleship formation―and learn the true nature of his character.Informed by P. T. Deutermann’s own experience as a commander of a patrol gunboat in Vietnam, The Hooligans is first-rate military adventure fiction. Review Praise for The Nugget:"Readers who enjoy WWII stories, especially those involving the air war, will be entranced...[Deutermann] is at the top of his game here." ―Jeff Ayers, Booklist “Packed with authentic military action on land and at sea in the Pacific Theatre of WWII and featuring a memorable protagonist based on a true-life hero, [The Nugget] demonstrates Deutermann’s mastery in adventure writing.” ―Mystery Tribune “A tour de force of excitement and intrigue…Deutermann captures the pace and passion of men at war, and his descriptions are riveting and personal. It is hard to imagine anyone not being immersed in this novel.” ―Shannon Carriger, San Francisco Book ReviewPraise for The Iceman:“Fast-paced, well-written, and full of been-there-done-that authenticity.” ―The Real Book Spy “The narration is brisk and stripped for action, which comes fast and furious. Deutermann throws in enough technical detail to satisfy any Tom Clancy enthusiast.” ―StarNews Praise for Pacific Glory: “From the first pages...you are hooked, drawn into the past and finally delivered back to the future, a journey taken with unforgettable characters.” ―Doug Stanton, bestselling author of Horse Soldiers and In Harm's Way “Epic, eloquent, and stirring…a war novel that is both sweeping and intensely personal.” ―Library Journal (starred review) “Those who like pulse-thumping action, cinematic prose, and intrepid heroes will be rewarded.” ―Publishers Weekly About the Author P. T. DEUTERMANN is the author of many previous novels including Pacific Glory, which won the W. Y. Boyd Literary Award for Excellence in Military Fiction. Deutermann spent twenty-six years in military and government service, as a captain in the Navy and in the Joint Chiefs of Staff as an arms-control specialist. He lives with his wife in North Carolina.

The Iceman: A Novel

Before
₱ 1,461.00
Pre-order Item
I confirm to purchase this pre-order item.
Other Choices
Return Policy
For more details please visit our page about Cancellations, Returns, and Refunds