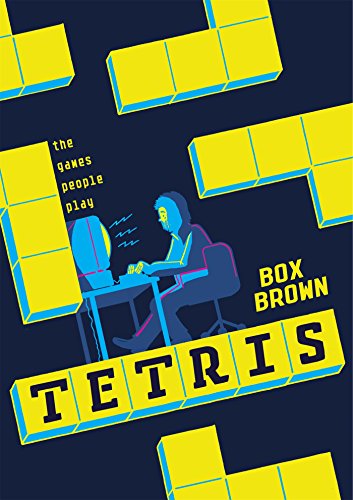 About Tetris: The Games People Play

Product Description It is, perhaps, the perfect video game. Simple yet addictive, Tetris delivers an irresistible, unending puzzle that has players hooked. Play it long enough and you’ll see those brightly colored geometric shapes everywhere. You’ll see them in your dreams.Alexey Pajitnov had big ideas about games. In 1984, he created Tetris in his spare time while developing software for the Soviet government. Once Tetris emerged from behind the Iron Curtain, it was an instant hit. Nintendo, Atari, Sega―game developers big and small all wanted Tetris. A bidding war was sparked, followed by clandestine trips to Moscow, backroom deals, innumerable miscommunications, and outright theft. In this graphic novel,New York Times–bestselling author Box Brown untangles this complex history and delves deep into the role games play in art, culture, and commerce. For the first time and in unparalleled detail, Tetris: The Games People Play tells the true story of the world’s most popular video game. From School Library Journal Gr 9 Up—Brown immerses readers in the complicated origins of one of the world's most popular video games, Tetris. Its creator, Alexey Pajitnov, was a computer scientist who became obsessed with how games and puzzles affected human psychology. Before long, Pajitnov became caught up in a prototype he'd designed based on a childhood game and shared it with his friends. Soon all of Moscow was consumed by what would eventually be called "the game that escaped the USSR." The art style is reminiscent of the Cyanide and Happiness comic but whimsical in tone. It also cleverly mimics the structure of Tetris itself: straightforward and engaging, without any extra bells and whistles. With the recent Nintendo release of the hit cell phone game Pokémon Go, this title is a timely explanation of the origins of the gaming world, particularly when it comes to the rivalries among various gaming companies. The story resonates and will appeal to fans of Jim Ottaviani's Feynman and Primates: The Fearless Science of Jane Goodall, Dian Fossey, and Biruté Galdikas. VERDICT This quick, thoughtful read will find an audience among teens interested in pursuing a career in video game design or those who wonder just how video games like Tetris have spread like wildfire.—Chantalle Uzan, New York Public Library Review Included in NYPL's "Notable 50 Best Books for Teens" list."The story never stops moving until its final pieces are in place."―New York Times"One of gaming's most intriguing tales...A book to watch." ―Nerdist"[A] look at the creation of Alexey Pajitnov’s enduring classic and the drama that ensues when people with big bags of money try to cash in the game’s popularity." ―Kotaku"A rich read that provides valuable context for the rise of video games in the late 20th century." ―A.V. Club"This is a work about the bittersweet dissonances of artistic creativity and commercial greed and the ephemeral yet crucial joy we get from making things fall into place." ―io9"Against the backdrop of the Cold War, the saga of Tetris played out like a spy thriller―tragic deaths, corporate conspiracies, the prestige of nations hanging in the balance." ―Boston Globe"A clean and engaging visual style supports a story that sustains narrative drive, humanizing the characters and making readers care about every development. " ―Kirkus, starred review"Simply illustrated in a sequential panel format, the charming black-andwhite drawings convey high-concept ideas in a clever, succinct manner." ―Booklist "Tetris is a remarkably spare work, cleanly and effortlessly introducing countless real-life characters and companies that intersect and tangle together in a game of tug-of-war." ―GQ"It also cleverly mimics the structure of Tetris itself: straightforward and engaging, without any extra bells and whistles." ―School Library Journal, starred review"The blocky paneled illustrations are reminiscent of early video game graphics, and the compact text uses dialogue ef

Is This Guy For Real?: The Unbelievable Andy Kaufm...

Andre The Giant: Life And Legend

Before
₱ 1,425.00
Pre-order Item
I confirm to purchase this pre-order item.
Other Choices
Return Policy
For more details please visit our page about Cancellations, Returns, and Refunds