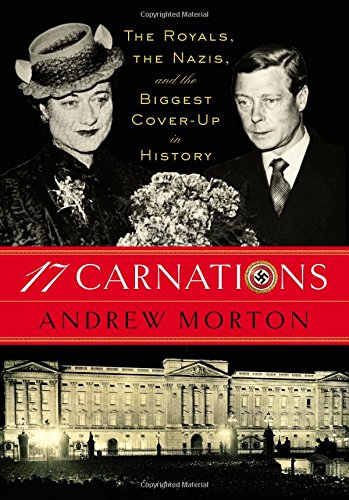 17 Carnations: The Royals, the Nazis, and the Biggest Cover-Up in History

See more product information!
-
Save 52%
Before
₱ 1,152
Price Tracker
*Used/Collectible item/s available. *Price and Stocks may change without prior notice
Pay with

17 Carnations: The Royals, the Nazis, and the Features

About 17 Carnations: The Royals, The Nazis, And The

Product Description For fans of the Netflix series The Crown, a meticulously researched historical tour de force about the secret ties among Franklin D. Roosevelt, Winston Churchill, the Duke of Windsor, and Adolf Hitler before, during, and after World War II. Andrew Morton tells the story of the feckless Edward VIII, later Duke of Windsor, his American wife, Wallis Simpson, the bizarre wartime Nazi plot to make him a puppet king after the invasion of Britain, and the attempted cover-up by Churchill, General Eisenhower, and King George VI of the duke's relations with Hitler. From the alleged affair between Simpson and the German foreign minister to the discovery of top secret correspondence about the man dubbed "the traitor king" and the Nazi high command, this is a saga of intrigue, betrayal, and deception suffused with a heady aroma of sex and suspicion. ,br> For the first time, Morton reveals the full story behind the cover-up of those damning letters and diagrams: the daring heist ordered by King George VI, the smooth duplicity of a Soviet spy as well as the bitter rows and recriminations among the British and American diplomats, politicians, and academics. Drawing on FBI documents, exclusive pictures, and material from the German, Russian, and British royal archives, as well as the personal correspondence of Churchill, Eisenhower, and the Windsors themselves, 17 CARNATIONS is a dazzling historical drama, full of adventure, intrigue, and startling revelations, written by a master of the genre. Review "Morton offers a nuanced, intimate, and psychologically incisive understanding of a troubling royal, and arguably, his even more troubling wife. Sorting through myths and conspiracy theories with great skill, he explores their relationship to Hitler and the Nazis. Morton is fearless in his observations and convincing in his conclusions. He vividly illuminates a dark corner of royal history, exposing events which Churchill, Eisenhower, and others tried to conceal."― Jonathan Petropoulos, author of Royals and the Reich: The Princes von Hessen in Nazi Germany "Explosive revelations...shocking."― Globe "Morton reveals the shocking story the royals tried to ban."― The New York Post "17 CARNATIONS blows open the British government's plot ot bury correspondence between the Duke of Windsor and his Nazi pen pals."― Vanity Fair "[17 CARNATIONS] provides plenty of fresh dope on the Windsors' cozy dealings with Adolf Hitler."― The Advocate "Filled with delicious tidbits...a fun book, filled with spice about a time that shocked the world."― The Owen Sound Sun Times "A very readable sequel to his seeming ongoing series about the wars of the Windsors."― Toronto Star About the Author Andrew Morton studied history at the University of Sussex, England, with a focus on aristocracy and the 1930s. Morton has written biographies featuring the British Royal Family as well as celebrities, including Tom Cruise, Angelina Jolie, and Madonna. His bestselling biography of Princess Diana, Diana: Her True Story, met with international acclaim as "the closest we will ever come to her autobiography."

Wallis In Love: The Untold Life Of The Duchess Of ...

Before
₱ 1,822.00
Pre-order Item
I confirm to purchase this pre-order item.
Big Discount!
This product, 17 Carnations: The Royals, the Nazis, and the Biggest Cover-Up in History, is currently discounted at 52% off! We don't know when it will go back to its original price so order now to secure it at this price! We'll make sure to order it immediately!
Other Choices
Return Policy
For more details please visit our page about Cancellations, Returns, and Refunds