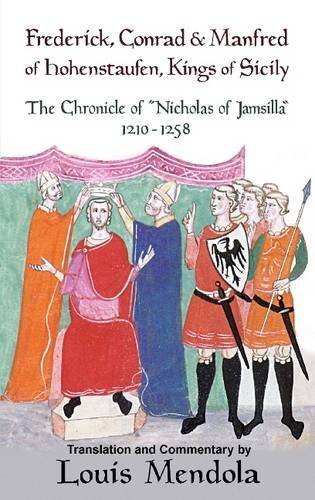 Frederick, Conrad and Manfred of Hohenstaufen, Kings of Sicily: The Chronicle of Nicholas of Jamsilla 1210-1258

Frederick, Conrad and Manfred of Features

About Frederick, Conrad And Manfred Of

In the decade following the death of Frederick II in 1250, his sons Conrad and Manfred had to defend the Kingdom of Sicily against covetous popes and traitorous barons. This is the only contemporary chronicle to recount these events from the point of view of the Hohenstaufen dynasty and their Ghibelline supporters. Here is the first English translation of the chronicle written in Latin at the traveling court of Manfred Hohenstaufen. Its publication in English is a milestone in the study of a key period in Italian and German history.The fascinating 'Jamsilla Chronicle' takes its name not from its narrator but from the medieval owner of its oldest manuscript, a codex kept in Naples. The name 'Jamsilla' is a corruption of 'Joinville,' an Angevin family that flourished in Italy after 1270. However, it is clear the chronicler was somebody close to King Manfred, and he offers us much insight into the monarch's exploits; many candidates have been advanced by historians as 'Nicholas of Jamsilla.'Most of the news recounted here centers on the period from 1250 until Manfred's coronation in 1258. The chronicle was completed by 1263, three years before Manfred's death at the Battle of Benevento. This text, one of the most important sources for a brief but pivotal period, has been consulted by such giants as Steven Runciman and David Abulafia. Mendola, who previously translated the memoir of John of Procida (The Rebellion of Sicily against King Charles) from Middle Sicilian, is intimately familiar with the Italian regions that are the focus of the chronicle, as well as the history itself. This book includes dozens of pages presenting maps, photographs and genealogical tables, while featuring the lengthiest commentary ever published in English about this oft-overlooked chronicle. Very little has ever been written about the chronicle in English, most of the existing essays being in Italian and German.A clear introduction considers the history of the Jamsilla Chronicle and its details. There are over 200 footnotes. The monolithic text of the chronicle has been divided into chapters for the reader's convenience. Additional sections are dedicated to historical outlines of the periods before and after those considered by the chronicle, framing it with useful context. A number of sources, such as royal decrees, support Mendola's commentary. Appendices focus on the feudal nobility, the nature of the Sicilian monarchy, the Teutonic Knights, the Duchy of Swabia, heraldry, and the Lancia family so influential during this era.This book will appeal to serious scholars but also to anybody interested in this complex transitional period of Italy's medieval history, which led to the end of Hohenstaufen rule, the beginning of the Angevin reign and the War of the Vespers. A superb 'background' source, the chronicle offers us a glimpse into the personalities and conflicts mentioned by Dante and Boccaccio.In bringing the chronicle to a wider audience, including Italian and German descendants around the world, this translation preserves a special piece of heritage. It opens the door to a colorful and significant era of European and Mediterranean history.

An Introduction To Antonio Gramsci

The Perfect Fascist: A Story Of Love, Power, And M...

My Two Italies: A Personal And Cultural History

Church Of Spies: The Pope's Secret War Against Hit...

₱ 3,183.00
Pre-order Item
I confirm to purchase this pre-order item.
Other Choices
Return Policy
For more details please visit our page about Cancellations, Returns, and Refunds