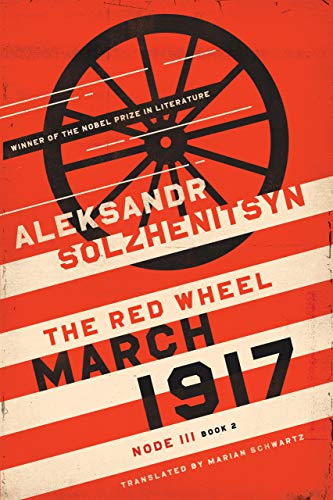 Product Description The Red Wheel is Nobel Prize–winner Aleksandr Solzhenitsyn's multivolume epic work about the Russian Revolution. He spent decades writing about just four of the most important periods, or "nodes.” This is the first time that the monumental March 1917―the third node―has been translated into English. It tells the story of the Russian Revolution itself, during which the Imperial government melts in the face of the mob, and the giants of the opposition also prove incapable of controlling the course of events. The action of Book 2 (of four) of March 1917 is set during March 13–15, 1917, the Russian Revolution's turbulent second week. The revolution has already won inside the capital, Petrograd. News of the revolution flashes across all Russia through the telegraph system of the Ministry of Roads and Railways. But this is wartime, and the real power is with the army. At Emperor Nikolai II’s order, the Supreme Command sends troops to suppress the revolution in Petrograd. Meanwhile, victory speeches ring out at Petrograd's Tauride Palace. Inside, two parallel power structures emerge: the Provisional Government and the Executive Committee of the Petrograd Soviet of Workers' and Soldiers’ Deputies, which sends out its famous "Order No. 1," presaging the destruction of the army. The troops sent to suppress the Petrograd revolution are halted by the army’s own top commanders. The Emperor is detained and abdicates, and his ministers are jailed and sent to the Peter and Paul Fortress. This sweeping, historical novel is a must-read for Solzhenitsyn's many fans, as well as those interested in twentieth-century history, Russian history and literature, and military history. Review " March 1917 is haunted by 'what-ifs.' Indeed, Solzhenitsyn suggests, the revolution was less likely than other outcomes, and all retrospective attempts to describe it as inevitable are fallacious. In his view, events might just as easily followed a different course. As we contemplate what transpired, we regret the Russia that might have been." ( The American Scholar) "Marian Schwartz's new translation is the first time the expansive and resonant March 1917: Node III: Book 2 has been published in English. . . . Solzhenitsyn captures the chaos of the time, when a centuries-old order fell and the factions that would fight to replace it were still forming." ( Foreword Reviews) "Of all his novels so far, this one feels the most immediate, the most current. The freneticism, violence, confusion, and disorientation of Russians in Petrograd from March 15 through March 17 of 1917 can also be seen in minds and actions of Chinese in Hong Kong, right now. . . . No one surpasses Solzhenitsyn in conveying a sense of what it feels to live at and near the center of this kind of vortex." ( Law and Liberty) "[B]ook 2 of the March 1917 node . . . dramatizes the tumultuous events of the March Revolution―a workers’ strike in Petrograd; abdication of Tsar Nicholas II and house arrest of the Romanov family; establishment of a provisional government to rule over Russia. Although The Red Wheel is fiction, Solzhenitsyn prided himself on the historical accuracy of his work. He spent ten years writing the March 1917 node, adding psychological depth, descriptive details, and, occasionally, his own views to bring well-known personalities and events to life." ( Choice) " March 1917, Book 2, covers the three days of the February Revolution, which is shown as an immense national unraveling that corrupted public morality and destroyed social cohesion, often with sadistic brutality, and that inevitably led to the Bolshevik takeover eight months later. This historical catastrophe, Solzhenitsyn believed, was due to the fecklessness of the imperial elites all the way up to the terminally mediocre Czar Nicholas II; the revolutionaries’ blind lust for destruction; and the estrangement of the bulk of the people from God and country." ( National Review) "Here we see how a millen

Before
₱ 3,025.00
Pre-order Item
I confirm to purchase this pre-order item.
Other Choices
Return Policy
For more details please visit our page about Cancellations, Returns, and Refunds