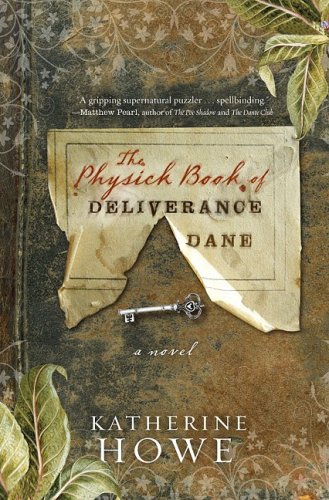 The Physick Book of Deliverance Dane

About The Physick Book Of Deliverance Dane

Product Description "A fresh present-day story infused with an original take on popular history. Forget broomsticks and pointy hats; here are witches that could well be walking among us today. This debut novel flows with poetic charm and eloquence that achieves high literary merit while concocting a gripping supernatural puzzler. Katherine Howe's talent is spellbinding." --Matthew Pearl, author of The Poe Shadow and The Dante Club A spellbinding, beautifully written novel that moves between contemporary times and one of the most fascinating and disturbing periods in American history-the Salem witch trials. Harvard graduate student Connie Goodwin needs to spend her summer doing research for her doctoral dissertation. But when her mother asks her to handle the sale of Connie's grandmother's abandoned home near Salem, she can't refuse. As she is drawn deeper into the mysteries of the family house, Connie discovers an ancient key within a seventeenth-century Bible. The key contains a yellowing fragment of parchment with a name written upon it: Deliverance Dane. This discovery launches Connie on a quest--to find out who this woman was and to unearth a rare artifact of singular power: a physick book, its pages a secret repository for lost knowledge. As the pieces of Deliverance's harrowing story begin to fall into place, Connie is haunted by visions of the long-ago witch trials, and she begins to fear that she is more tied to Salem's dark past then she could have ever imagined. Written with astonishing conviction and grace, The Physick Book of Deliverance Dane travels seamlessly between the witch trials of the 1690s and a modern woman's story of mystery, intrigue, and revelation. From Publishers Weekly Set in Cambridge and Marblehead, Mass., Howe's propulsive if derivative novel alternates between the 1991 story of college student Connie Goodwin and a group of 17th-century outcasts. After moving into her grandmother's crumbling house to get it in shape for sale, Connie comes across a small key and piece of paper reading only Deliverance Dane. The Salem witch trials, contemporary Wicca and women's roles in early American history figure prominently as Connie does her academic detective work. What follows is a breezy read in which Connie must uncover the mystery of a shadowy book written by the enigmatic Deliverance Dane. During Connie's investigation, she relies on a handsome steeplejack for romance and her mother and an expert on American colonial history for clues and support. While the twisty plot and Howe's habit of ending chapters with cliffhangers are straight out of the thriller playbook, the writing is solid overall, and Howe's depiction of early American life and the witch trials should appeal to readers who enjoyed The Heretic's Daughter. The witchcraft angle and frenetic pacing beg for a screen adaptation. (June) Copyright © Reed Business Information, a division of Reed Elsevier Inc. All rights reserved. From Booklist *Starred Review* Harvard graduate student Connie Godwin is determination personified. She will get her doctorate and find success as a historian, whether her aura-reading mother understands her bookishness or not. But first she has to contend with her tweedy adviser’s oddly urgent demands and her late grandmother’s incredibly old, long-abandoned house in Marblehead, Massachusetts. The house is cloaked in vines and stuffed with dusty old bottles and books, but its clutter yields a tantalizing scrap of paper carrying the words “Deliverance Dane.” Connie hasn’t a clue, but the reader knows, thanks to alternating chapters set in the late-seventeenth century, that Deliverance was a good woman accused of being a witch during the infamous Salem witch hysteria. Soon Connie, admirably sensible in the face of mystifying, even terrifying occurrences, zealously searches archives and libraries for healer Deliverance’s “shadow book,” while struggling to understand her own weird, new powers. Historian Howe’s spell

The Crossing At Cypress Creek (A Natchez Trace Nov...

Tibaldo And The Hole In The Calendar

Before
₱ 970.00
Pre-order Item
I confirm to purchase this pre-order item.
Other Choices
Return Policy
For more details please visit our page about Cancellations, Returns, and Refunds