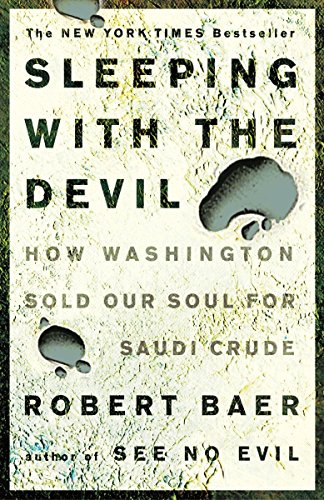 Sleeping with the Devil: How Washington Sold Our Soul for Saudi Crude

About Sleeping With The Devil: How Washington Sold Our

“Saudi Arabia is more and more an irrational state—a place that spawns global terrorism even as it succumbs to an ancient and deeply seated isolationism, a kingdom led by a royal family that can’t get out of the way of its own greed. Is this the fulcrum we want the global economy to balance on?”In his explosive New York Times bestseller, See No Evil, former CIA operative Robert Baer exposed how Washington politics drastically compromised the CIA’s efforts to fight global terrorism. Now in his powerful new book, Sleeping with the Devil, Baer turns his attention to Saudi Arabia, revealing how our government’s cynical relationship with our Middle Eastern ally and America’ s dependence on Saudi oil make us increasingly vulnerable to economic disaster and put us at risk for further acts of terrorism.For decades, the United States and Saudi Arabia have been locked in a “harmony of interests.” America counted on the Saudis for cheap oil, political stability in the Middle East, and lucrative business relationships for the United States, while providing a voracious market for the kingdom’ s vast oil reserves. With money and oil flowing freely between Washington and Riyadh, the United States has felt secure in its relationship with the Saudis and the ruling Al Sa’ud family. But the rot at the core of our “friendship” with the Saudis was dramatically revealed when it became apparent that fifteen of the nineteen September 11 hijackers proved to be Saudi citizens.In Sleeping with the Devil, Baer documents with chilling clarity how our addiction to cheap oil and Saudi petrodollars caused us to turn a blind eye to the Al Sa’ud’s culture of bribery, its abysmal human rights record, and its financial support of fundamentalist Islamic groups that have been directly linked to international acts of terror, including those against the United States. Drawing on his experience as a field operative who was on the ground in the Middle East for much of his twenty years with the agency, as well as the large network of sources he has cultivated in the region and in the U.S. intelligence community, Baer vividly portrays our decades-old relationship with the increasingly dysfunctional and corrupt Al Sa’ud family, the fierce anti-Western sentiment that is sweeping the kingdom, and the desperate link between the two. In hopes of saving its own neck, the royal family has been shoveling money as fast as it can to mosque schools that preach hatred of America and to militant fundamentalist groups—an end game just waiting to play out.Baer not only reveals the outrageous excesses of a Saudi royal family completely out of touch with the people of its kingdom, he also takes readers on a highly personal search for the deeper roots of modern terrorism, a journey that returns time again and again to Saudi Arabia: to the Wahhabis, the powerful Islamic sect that rules the Saudi street; to the Taliban and al Qaeda, both of which Saudi Arabia helped to underwrite; and to the Muslim Brotherhood, one of the most active and effective terrorist groups in existence, which the Al Sa’ud have sheltered and funded. The money and arms that we send to Saudi Arabia are, in effect, being used to cut our own throat, Baer writes, but America might have only itself to blame. So long as we continue to encourage the highly volatile Saudi state to bank our oil under its sand—and so long as we continue to grab at the Al Sa’ud’s money—we are laying the groundwork for a potential global economic catastrophe.From the Hardcover edition.

Motor City: The Odyssey Of The War On Drugs, Scale...

The Improv: An Oral History Of The Comedy Club Tha...

The Great Book Of Hawaii: The Crazy History Of Haw...

The University Of Cambridge: A New History

Before
₱ 3,926.00
Pre-order Item
I confirm to purchase this pre-order item.
Other Choices
Return Policy
For more details please visit our page about Cancellations, Returns, and Refunds