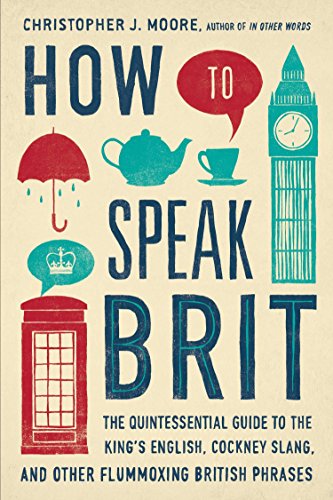 How to Speak Brit: The Quintessential Guide to the King's English, Cockney Slang, and Other Flummoxing British Phrases

How to Speak Brit: The Quintessential Guide to the Features

About How To Speak Brit: The Quintessential Guide To The

Product Description The quintessential A to Z guide to British English—perfect for every egghead and bluestocking looking to conquer the language barrier   Oscar Wilde once said the Brits have "everything in common with America nowadays except, of course, language."   Any visitor to Old Blighty can sympathize with Mr. Wilde. After all, even fluent English speakers can be at sixes and sevens when told to pick up the "dog and bone" or "head to the loo," so they can "spend a penny." Wherever did these peculiar expressions come from?   British author Christopher J. Moore made a name for himself on this side of the pond with the sleeper success of his previous book, In Other Words. Now, Moore draws on history, literature, pop culture, and his own heritage to explore the phrases that most embody the British character. He traces the linguistic influence of writers from Chaucer to Shakespeare and Dickens to Wodehouse, and unravels the complexity Brits manage to imbue in seemingly innocuous phrases like "All right." Along the way, Moore reveals the uniquely British origins of some of the English language’s more curious sayings. For example: Who is Bob and how did he become your uncle? Why do we refer to powerless politicians as “lame ducks”? How did “posh” become such a stylish word? Part language guide, part cultural study, How to Speak Brit is the perfect addition to every Anglophile’s library and an entertaining primer that will charm the linguistic-minded legions. About the Author Christopher J. Moore is an author and editor. He splits his time among Scotland, Spain, and the Swiss Alps. Excerpt. © Reprinted by permission. All rights reserved. Introduction There is something that has to be understood straightaway about the British: As soon as you open your mouth, your listener puts you into a social category. “Language most shewes a man: speake that I may see thee,” wrote the playwright Ben Jonson as early as 1641 to point out that your life could literally depend on the way you spoke. The principle of respecting the King’s English was already well established by the mid-seventeenth century and we have to go back some two-hundred years further to find where it all started. In the Middle Ages, Latin and French had been the languages of government and diplomacy, but during the Renaissance the change to vernacular languages was happening all over Europe, and England was no exception. As yet, English had little or no standard spelling and existed in a thousand different varieties and dialects. Only around the start of the fifteenth century did a standard form of English begin to be adopted for government business in London, thus establishing a court English as opposed to a country English. When William Caxton set up his printing press later that century, this was the standard he adopted, initiating an industry so successful that here we are, still at it, making books. As for the actual expression, “the King’s English,” Thomas Wilson appears to have been the first to use it in his Art of Rhetorique of 1553, where he takes to task the pretensions of those who infect the English language with fancy foreign borrowings, or what he calls “strange inkhorn terms.” Wilson was so irritated with what he saw as a departure from plain speech that he wrote, “they forget altogether their mother’s language. And I dare swear this, if some of their mothers were alive, they were not able to tell what they say, and yet these fine English clerks will say they speak in their mother tongue, if a man should charge them for counterfeiting the King’s English.” Over the next three centuries, many other writers pursued the same ideal, driven by their annoyance with lax standards to publish guides and norms for good writing and speaking. Educationalists followed suit, with the newly founded grammar schools teaching good practice. Language was increasingly the key that opened the door to elegant society, employment, and advancement. Lessons in elocuti

Knickers In A Twist: A Dictionary Of British Slang

The UK To USA Dictionary: British English Vs. Amer...

Before
₱ 659.00
Pre-order Item
I confirm to purchase this pre-order item.
Other Choices
Return Policy
For more details please visit our page about Cancellations, Returns, and Refunds