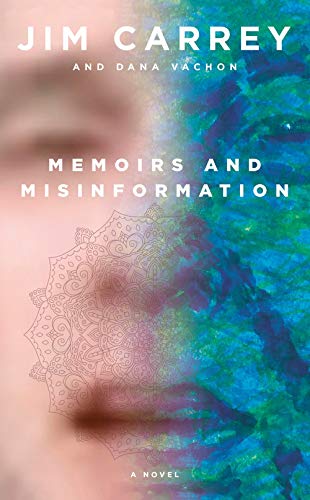 Memoirs and Misinformation: A novel

About Memoirs And Misinformation: A Novel

Product Description A NEW YORK TIMES BESTSELLER"None of this is real and all of it is true." --Jim Carrey Meet Jim Carrey. Sure, he's an insanely successful and beloved movie star drowning in wealth and privilege--but he's also lonely. Maybe past his prime. Maybe even . . . getting fat? He's tried diets, gurus, and cuddling with his military-grade Israeli guard dogs, but nothing seems to lift the cloud of emptiness and ennui. Even the sage advice of his best friend, actor and dinosaur skull collector Nicolas Cage, isn't enough to pull Carrey out of his slump. But then Jim meets Georgie: ruthless ingénue, love of his life. And with the help of auteur screenwriter Charlie Kaufman, he has a role to play in a boundary-pushing new picture that may help him uncover a whole new side to himself--finally, his Oscar vehicle! Things are looking up! But the universe has other plans. Memoirs and Misinformation is a fearless semi-autobiographical novel, a deconstruction of persona. In it, Jim Carrey and Dana Vachon have fashioned a story about acting, Hollywood, agents, celebrity, privilege, friendship, romance, addiction to relevance, fear of personal erasure, our "one big soul," Canada, and a cataclysmic ending of the world--apocalypses within and without. Review "A satirical adventure in which Carrey plumbs the chasms of Hollywood's self-obsessed culture."  —Dave Itzkoff, The New York Times “A simultaneously baffling and mesmerizing examination of Carrey’s psyche . . .  a reimagining of the traditional Hollywood tell-all.”  —Thomas Floyd, The Washington Post “Memoirs and Misinformation is, like the twisted political drawings Carrey posts on Twitter, entirely its own thing. A satire of Hollywood’s self-absorption coinciding with the end of the planet, none of it is real ... except when it is . . . A wholly strange work of autofiction, laden with symbolism and metaphor, sometimes beautiful, sometimes tragic.”  —Glenn Whipp, Los Angeles Times "An engaging, fun tale that plays with the public perceptions of celebrities, questions our compulsive need to view, and contains a gloriously off-the-wall conclusion."  —Alexander Moran, Booklist "Not a typical tell-all. . . . blends moving autobiography, name-droppish tabloid fodder, science-fiction, and anti-capitalist screed." —Entertainment Weekly “A mad fever dream. . . Carrey and his collaborator Vachon pull out all the stops as their protagonist Jim Carrey careens from midlife blues through love and career complications toward the apocalypse . . . gems of comic fantasy and the nuggets of memoir gold.”  —Kirkus About the Author JIM CARREY is an award-winning actor and artist.  DANA VACHON is the author of the novel Mergers and Acquisitions. His essays and journalism have appeared in The New York Times, Slate, and Vanity Fair. He lives in Brooklyn. Excerpt. © Reprinted by permission. All rights reserved. Prologue   They knew him as Jim Carrey.   And by the middle of that December his lawn had burned to a dull, amber brittle. And at night, after the sprinklers’ ten minutes of city-rationed watering, the grass blades floated in pooled water— limp and wasted like his mother’s hair in the final morphine sweats.   The city of Los Angeles had been moving hellward since April, with bone- dry reservoirs and strings of scorching days, the forecasts reading like a sadist’s charm bracelet, 97- 98- 105- 103. Last week an F-16 had flashed like a switch-blade through the ash- filled sky just as one of the gardeners on the Hummingbird Road estate collapsed of sunstroke and fell into seizures. The man fought as they carried him to the house, saying the Virgin Mary had promised him a slow dance for three dollars in the cool shade of the ravine. At night came the Santa Anas, those devil winds that sapped the soul, that set police sirens wailing as the sunsets burned through napalm oranges into sooty mauves. Then each morning a smoggy breath would draw across the canyons and into the

A Very Punchable Face: A Memoir

Too Much And Never Enough: How My Family Created T...

Before
₱ 1,279.00
Pre-order Item
I confirm to purchase this pre-order item.
Other Choices
Return Policy
For more details please visit our page about Cancellations, Returns, and Refunds