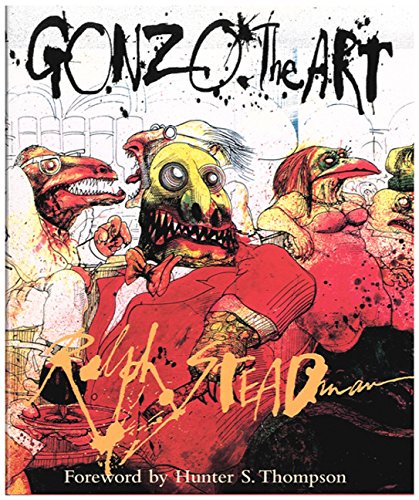 About Gonzo: The Art

Product Description A three-decade retrospective of Ralph Steadman’s caustic, witty, outrageous art, including illustrations from Fear and Loathing in Las Vegas and the other legendary collaborations with Hunter S. Thompson that spawned "gonzo journalism." Illustrated throughout in color and black-and-white, with an introduction by Hunter S. Thompson. Amazon.com Review Hunter S. Thompson, in his drunken, rambling introduction to this volume of paintings and illustrations, calls Ralph Steadman "the Albert Gore of twentieth century art." It's hard to imagine a less apt appellation: Steadman's drawings and paintings are the wild antithesis of the notoriously stiff V.P. His pop art is also the opposite of Warhol's clean lines and soulless imagery; it screams with pain and nightmare power. While Steadman is best known for his illustrations to Thompson's Fear and Loathing in Las Vegas and other works, here his art is given free rein, and works with titles like "Earliest man, full of the sense of his own worth, screaming into the blackness, needing no god but himself..." and "Good time crucifix" combine Steadman's trademark splattered ink and unfolded figures with collage and sloppy airbrush. Although the text may offend those with no sense of irony (Thompson compares Steadman to artist manqué Adolf Hitler; Steadman relates the story of his first bowel movement), the hyperactive visuals are sure to delight even those who've never snorted ether while tripping on pure human adrenochrome. --James DiGiovanna From Library Journal From the illustrator who collaborated with Hunter S. Thompson to redefine journalism: a comprehensive compendium. Copyright 1998 Reed Business Information, Inc. From Booklist Ever since British cartoonist Steadman won American fame illustrating Hunter S. Thompson's Fear and Loathing in Las Vegas (1972), which gave gonzo (meaning, perhaps, sleazy and out of control) to the language, his ferocious art has been called gonzo. This book samples 30 years of it, notably extracting from Steadman's first work with Thompson, a piece about the Kentucky Derby. Like the others, the Derby pictures are vibrantly ugly, visions of hell on earth. Like George Grosz, the caricaturist of Weimar German corruption, Steadman sees through filth-colored glasses, and the grotesque figures he draws would be repulsive except that they are laughably unaware of their own hideousness. Steadman is aware, though, and angry--so angry that, 10 years ago, he swore off drawing any actual politicians (what he had already done with Nixon's visage, reprinted here, is devastating); so angry that, in another trademark of his style, he spatters, splashes, and smears ink across his line work. His stuff makes mere political cartooning look like Martha Stewart Living. Ray Olson About the Author RALPH STEADMAN has illustrated many books, including Hunter S. Thompson’s Fear and Loathing in Las Vegas and the fiftieth-anniversary edition of George Orwell’s Animal Farm. He is the author of The Grapes of Ralph (for which he won a Glenfiddich Food & Drink Award), Still Life with Bottle, The Book of Jones, and Gonzo: The Art.

Fear And Loathing In Las Vegas: A Savage Journey T...

Before
₱ 917.00
Pre-order Item
I confirm to purchase this pre-order item.
Other Choices
Return Policy
For more details please visit our page about Cancellations, Returns, and Refunds