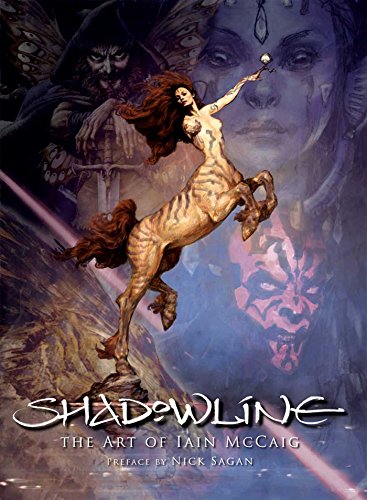 Shadowline: The Art of Iain McCaig

About Shadowline: The Art Of Iain McCaig

Product Description "What is Shadowline? It is the place where things meet: light and shadows, hope and despair, good and evil. It is, to me, the most interesting place to hunt for stories." So begins this stunningly realized and beautifully rendered new work from master storyteller and artist Iain McCaig. McCaig is best known for his work as a principal designer on the three Star Wars prequels, including the iconic characters Queen Amidala and Darth Maul, as well as his work on many major motion pictures, television, and video games. His work can be seen in such acclaimed films as Terminator 2, Hook, Francis Ford Coppola's Dracula, Interview with a Vampire, and Harry Potter and the Goblet of Fire. Shadowline presents a stunning portfolio of more than two decades of McCaig's masterful concept designs and storyboards, cover art and illustrations, as well as his private sketchbooks and personal paintings, all woven together within the confines of an engrossing, otherworldly tale. About the Author Iain McCaig's commitment to storytelling has taken many forms: concept designer, illustrator, animator and screenwriter. A veteran of Industrial Light & Magic, Lucasfilm, Ltd., and George Lucas' premiere production division, JAK Films, he was one of the principal designers of the prequel Star Wars saga. His directorial debut, The Face, won the Gold Medal for Best Family Film at the Houston International Film Festival. Nick Sagan, the son of Carl Sagan, is the best-selling author of the science fiction series The Idlewild Trilogy. He is a television screenwriter whose work includes episodes of the later Star Trek series.

Back In The Days

On Camp Ceramics And Other Diversions: Daniel Krug...

Before
₱ 4,068.00
Pre-order Item
I confirm to purchase this pre-order item.
Other Choices
Return Policy
For more details please visit our page about Cancellations, Returns, and Refunds