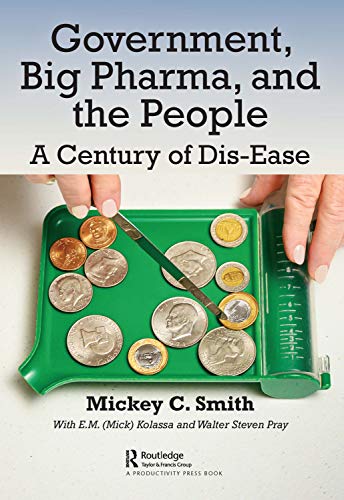 Government, Big Pharma, and The People: A Century of Dis-Ease

About Government, Big Pharma, And The People: A Century

Product Description Pharmaceuticals constitute a relatively small share of the total Health Care expenditure in most developed economies, and yet they play a critical role in the ongoing debate over how best to advance, improve, and afford Health Care. Despite this, and perhaps because of this, the industry has had, for many years, an outsized claim to fame and controversy, praise and criticisms, and support and condemnation. Unfortunately, many participants in the debate do not fully understand the complexities of the industry and its role in the overall Health Care system. The analytical tools of economics provide a strong foundation for a better understanding of the dynamics of the pharmaceutical industry, its contribution to Health and Health Care, and its dual and often conflicting priorities of affordability and innovation, as well as the various Private and Public Policy initiatives directed at the sector. Everyone is affected by Big Pharma and the products they produce. At the Drug store, the physician’s office, in front of the television, in everyday conversations, Drugs are a part of our lives. Society shapes our values toward Drugs and Drugs shape society. ("The Pill" and minor tranquilizers are good examples.) And, of course, the way Congress deliberates and Big Pharma responds has a huge impact on how Drugs affect our lives. This book is well-researched on the subject of the pharmaceutical industry, its struggles with Government, and its relationship to the consumer from the early twentieth century until the present. The Dynamic Tension between the three participants – Government, Big Pharma, and the People – is described and explained to lead to an understanding of the controversies that rage today. The author describes how the Government, its many investigatory efforts, and the ultimate legislative results affect the industry and the consequences of their activities are explored in light of their effects on other players, including the patients and consumers who rely on both Government and Big Pharma for their well-being and who find sometimes unexpected consequences while giving special attention to the attitudes, beliefs, and misadventures of less-than-optimal Drug use. Stakeholders are identified with physicians as a major focus, as well as describing the significance of prescriptions as social objects and the processes by which physicians make choices on behalf of their patients. The author ties it all together with how Big Pharma affects and is affected by each of these groups. The author utilizes his 50-plus years’ experience as an academic, practicing pharmacist, and Big Pharma employee to describe the scope of the pharmaceutical industry and how it affects us on a daily basis, concluding with an inside look at Big Pharma and how regulations, marketing, and the press have affected their business, both good and bad. About the Author Dr. Mickey C. Smith is author or editor of more than a score of books as well as 400+ papers in more than 100 different journals. His work has been translated into Chinese, Japanese, Russian, Spanish and Korean. Among his national and international awards are: Distinguished Educator from the American Association of Colleges of Pharmacy (first time given), Fellowship in the Institute of Pharmacy International, Australian Institute of Pharmacy Management, and an Honorary Doctorate from his alma mater, the St. Louis College of Pharmacy. Smith has served as a consultant to the FDA, FTC, WHO and served as a member of Big Pharma. Smith is Barnard Professor Emeritus of Pharmacy Administration and of Management and Marketing at the University of Mississippi.

Cotton And Race In The Making Of America: The Huma...

The Next Factory Of The World: How Chinese Investm...

Before
₱ 11,357.00
Pre-order Item
I confirm to purchase this pre-order item.
Other Choices
Return Policy
For more details please visit our page about Cancellations, Returns, and Refunds