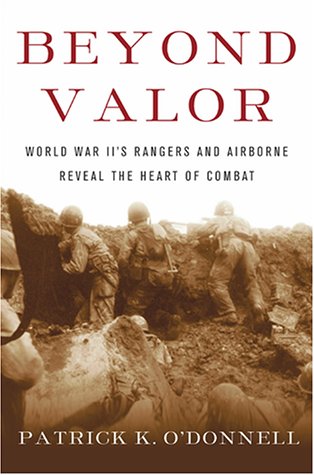 About Beyond Valor: World War II's Ranger And Airborne

Product Description Members of the Ranger and Airborne troops from World War II tell their own action-packed stories of dropping behind enemy lines, in a series of eyewitness accounts of the war in North Africa and Europe based on more than six hundred interviews with the veterans. 50,000 first printing. Amazon.com Review The success of Tom Brokaw's Greatest Generation has sparked a renewed interest in books about World War II and the people who fought in it. Patrick K. O'Donnell maintains, however, that behind those official histories and carefully crafted memoirs lies a "hidden war"--"a bottled up, buried version shielded even from family members because many of the memories are too painful to discuss." In Beyond Valor, O'Donnell brings this hidden war to the surface, allowing men from the elite forces to tell their own stories, thus creating a fascinating combat history of WWII. O'Donnell introduces readers to some of the greatest of the greatest generation--men such as Robert Kinney of the 504th Parachute Infantry Regiment, wounded by a mortar at Anzio ("it tore my fanny open, took a big chunk of meat out of there--I could afford that"). While in the hospital, wounded members of the regiment were asked by one of their officers to return to the front: We all went down, about forty of us in casts, bandages, arms in slings and everything. He said, "Your buddies up there are catching hell and we've got to go back if we can. You don't have to, we're not going to order you, but we're looking for volunteers." We said, "Hell, we'll go." We had just the best-spirited bunch of scrappers you ever saw. There are also stories about compassion in the midst of carnage. Albert Hassenzahl of the 506th Parachute Infantry Regiment was seriously injured on a drop during the Normandy invasion. While waiting to be rescued, the wind blew his blanket off him. A man on an adjacent stretcher reached over and carefully tucked the blanket in around Hassenzahl. The other man was a German POW. "I didn't say a word to him, but I was able to move my head a little and looked over at him ... neither of us said a word, but mentally I might have said 'thank you' with my eyes and he might have said 'you're welcome' with his." Though it will certainly appeal to them, O'Donnell insists that Beyond Valor is not aimed at war buffs--it's for the soldiers themselves. "My work has been one of preservation, done in gratitude for a generation that sacrificed so much." By sharing these stories, O'Donnell has helped to preserve and honor their memory. --Sunny Delaney From Publishers Weekly Over a hundred individual veterans' vignettes are drawn from oral histories and electronically transmitted memoirs ("e-histories") in this assemblage of firsthand accounts of the WWII American Airborne, Ranger and other special units. Instrumental to the collection of these stories was O'Donnell's special-interest Web site, The Drop Zone (www.thedropzone.org), which functions as a "virtual museum" of vet experience. The book itself, after a brief introduction sketching the origins of the special units, is comprised of chapters devoted to a dozen operations in the European theater, from initial forays at Dieppe and North Africa, through Italy and Normandy, to final months in Holland and Germany. One chapter covers the home front experiences of African-American troops in the 555th Parachute Infantry Battalion. O'Donnell furnishes a cogent introductory overview of each operation, after which a number of veterans describe their memories of the action. Most of these remembrances are work-a-day, telegraphic run-downs of key situations beach landings and marches to lines, a night in the cargo hold of a destroyer, a diversionary attack on a fortified town that leave a lot of emotional baggage under the surface, in favor of often mortal logistics (some of which involves atrocities on both sides). Most fail to make their situations vivid or compelling to the uninitiated. (Mar. 12

The Unknowns: The Untold Story Of America's Unknow...

Before
₱ 1,312.00
Pre-order Item
I confirm to purchase this pre-order item.
Other Choices
Return Policy
For more details please visit our page about Cancellations, Returns, and Refunds