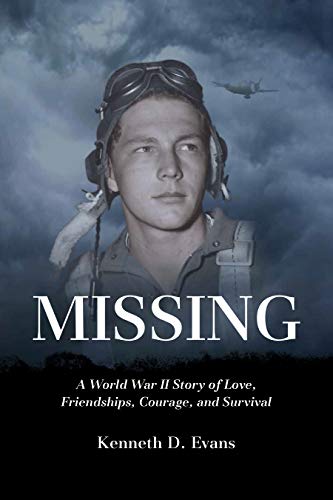 About MISSING: A World War II Story Of

Product Description Don was an all-American boy who went to war for his country... ...but he never expected to end up in a Nazi POW camp. Student-body president with all-state sports honors, Don was destined for a bright future. His plans included college and marrying the love of his life, Laura Jeanne. Then fate stepped in. Japan bombed Pearl Harbor and America entered World War II. At age 19, Don joined the United States Army Air Force and flew in the 368th Fighter Group of the Ninth Air Force. That is, until he was shot down behind enemy lines in the Battle of the Bulge. Lost, cold, and hungry, Don spent Christmas Eve wondering if he'd ever see his family again. Using excerpts from his parent's personal letters, journals, and actual images from their experiences, Kenneth D. Evan creates a heartfelt narrative founded on historical accuracy.  You'll love MISSING for the story of survival, true love, and an American hero overcoming insurmountable odds. Review “Author Kenneth D. Evans impressively pulls off what is generally considered rare—a historically rigorous portrait of a subject for whom the writer harbors infinite affection. He also includes an endearingly intimate account of his own motivations: to fill in the gaps left by his father’s reticence regarding the war and fully understand the man he came to appreciate as a hero. A skillfully crafted war story that’s both touching and historically captivating.” —Kirkus Reviews “Missing is the story of how a young man’s ordeal in war shaped him, strengthened his love for the woman waiting back home, and ultimately gave meaning to his life. Ken Evans has done a superb job of researching and telling the story of his father, who represents so many other men from World War II whose stories may never be told.” —Gregory A. Freeman, author of The Forgotten 500 "Having lost my own brother in World War II, I believe it's vital for us to remember the sacrifices and service so many gave in that great conflict. Kenneth Evans's heartfelt recounting of his father's experiences as a WWII pilot and POW is a touching tale of friendship, sacrifice, and the sustaining power of love."—Senator Orrin Hatch "Lt. Donald N Evans distinguished himself in the course of his military service during World War II, especially by the way he conducted himself in captivity. The author truly honors his father's legacy with such a touching story--you won't want to put it down once you get started. I salute him for this beautiful book." —Maj. General H.D. Polumbo (ret), Commander of the Ninth Air Force "In Ken Evans's book Missing, he follows the World War II experiences of his own father during wartime in Europe. Through firsthand letters, journals, and personal histories, we get an exclusive glimpse into a time and place we can only read about today. A wonderful book and a beautiful read." —Stephen M.R. Covey, New York Times and Wall Street Journal bestselling author of The Speed of Trust "There are many excellent World War II histories and biographies. Rarely does one find both under a single cover. More than a love story, Ken Evans's book pays tribute to his father's comrades and others who touched his family's life. Missing chronicles the unvarnished, often cruel truths from the dangers faced by Air Force pilots, the friendships they made and lost, and the constant uncertainty endured by loved ones at home. Historical references, excellent photos, documents, and maps provide ample historical context. This book is a must read for any WWII enthusiast--and for all those interested in a heartfelt story of humanity." —Dr. Timothy M. Grace, psychologist, WWII historian, and author of Second to None: The History of the 368th Fighter Group "When Generations of Americans have never known World War or a threat to their way of life, it becomes important they learn the stories of WWII and the sacrifices made by millions of ordinary citizens who became extraordinary soldiers. One of those was Donald N Evans

Shot Down: The True Story Of Pilot Howard Snyder A...

Before
₱ 1,451.00
Pre-order Item
I confirm to purchase this pre-order item.
Other Choices
Return Policy
For more details please visit our page about Cancellations, Returns, and Refunds