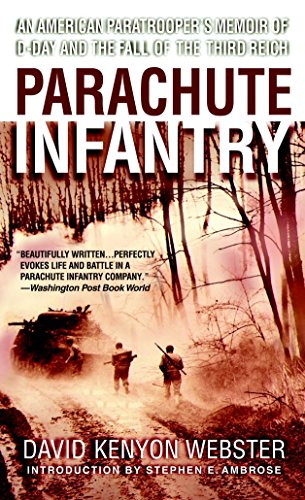 Parachute Infantry: An American Paratrooper's Memoir of D-Day and the Fall of the Third Reich

About Parachute Infantry: An American Paratrooper's

Product Description David Kenyon Webster’s memoir is a clear-eyed, emotionally charged chronicle of youth, camaraderie, and the chaos of war. Relying on his own letters home and recollections he penned just after his discharge, Webster gives a first hand account of life in E Company, 101st Airborne Division, crafting a memoir that resonates with the immediacy of a gripping novel. From the beaches of Normandy to the blood-dimmed battlefields of Holland, here are acts of courage and cowardice, moments of irritating boredom punctuated by moments of sheer terror, and pitched urban warfare. Offering a remarkable snapshot of what it was like to enter Germany in the last days of World War II, Webster presents a vivid, varied cast of young paratroopers from all walks of life, and unforgettable glimpses of enemy soldiers and hapless civilians caught up in the melee. Parachute Infantry is at once harsh and moving, boisterous and tragic, and stands today as an unsurpassed chronicle of war—how men fight it, survive it, and remember it. Review "Webster left this gutsy, sometimes bemused and sometimes angry memoir behind.... It bites and hangs on."— The New York Times"Beautifully written... perfectly evokes life and battle in a parachute infantry company."— Washington Post Book World About the Author David Kenyon Webster worked as a reporter and writer after the war. The Saturday Evening Post published a portion of his memoir, but book publishers rejected his manuscript, seeking sensationalized novels of the war rather than authentic memoirs. He died in 1961 in a boating accident while shark fishing. Excerpt. © Reprinted by permission. All rights reserved. It was the end of May, 1944. We had been in England eight months while others fought, and now our time had come. A last inspection, a last short-arm; clean the barracks and police the area. Every man gets a new jumpsuit and an orange smoke grenade. We move out at noon. O.K., let's go. Mount the buses and say goodbye to the village of Aldbourne, to its green hills and mossy barns and thatched cottages, to the white pubs, the brown cow-pond, the old gray church. A V sign, a wave of the hand, a friendly smile for the two bakers and Barney and Ma and the crippled man who drags a child's cart, collecting cans for the scrap-metal drive. No more London, no more mild-and-bitter, no more field problems or playground jumps. We were hot and crowded on the ride south but not unaware of the beauty around us, a beauty made more lovely by the knowledge that many of us would never see it again. Loaded with gear and ammunition and sweating terribly in woolen winter uniforms, we drove under the tall green trees south of camp, past Wittenditch and the back hill to Ramsbury, past the cozy tea room at Chilton Foliat and the water meadow and cattail bog that fronted on the pink, Elizabethan magnificence of Littlecote Manor, home of the legendary wild Darrells and more recently of our regimental commander, Colonel Robert F. Sink. We crossed the Kennet River on an arched stone bridge, made a sharp left turn at the Froxfield-Littlecote intersection, and rolled through Hungerford to the Great Western Railroad station on the outskirts, where we must have waited for hours. At least it seemed like hours, for the sun was so hot, our gear so tight, our clothes so airless and itchy. Gradually the talk died down and more and more men lay back on their musette bags and fell asleep. Tension passed into boredom. It was supposed to be a secret that we were setting off for the Invasion of Europe, but the secret was hard to keep from passersby. Our fresh bandoleers, new ammunition pouches, and full musette bags; the camouflage netting on our helmets; the bundles of orange cloth and identification panels that almost every man carried; the trench knives sewn on our boots; the tense, excited way we talked. I, however, was still skeptical, for I had imagined that our last move would be at least as well disguised

Easy Company Soldier: The Legendary Battles Of A S...

Beyond Band Of Brothers: The War Memoirs Of Major ...

Before
₱ 1,135.00
Pre-order Item
I confirm to purchase this pre-order item.
Other Choices
Return Policy
For more details please visit our page about Cancellations, Returns, and Refunds