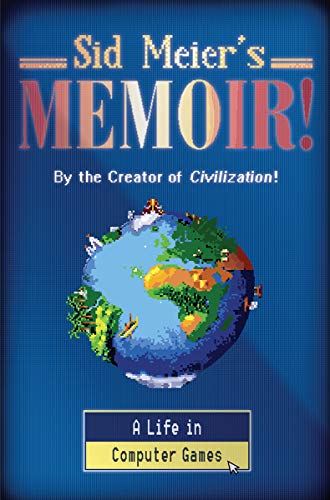 About Sid Meier's Memoir!: A Life In Computer Games

Product Description The life and career of the legendary developer celebrated as the “godfather of computer gaming,” and creator of Civilization. Over his four-decade career, Sid Meier has produced some of the world’s most popular video games, including Sid Meier’s Civilization, which has sold more than 51 million units worldwide and accumulated more than one billion hours of play. Sid Meier’s Memoir! is the story of an obsessive young computer enthusiast who helped launch a multibillion-dollar industry. Writing with warmth and ironic humor, Meier describes the genesis of his influential studio, MicroProse, founded in 1982 after a trip to a Las Vegas arcade, and recounts the development of landmark games, from vintage classics like Pirates! and Railroad Tycoon, to Civilization and beyond. Articulating his philosophy that a video game should be “a series of interesting decisions,” Meier also shares his perspective on the history of the industry, the psychology of gamers, and fascinating insights into the creative process, including his rules of good game design. 21 illustrations Review “Any game designer who tries to tell you that he hasn’t taken anything away from a Sid Meier game is akin to a film director saying he has never watched a Hitchcock movie. For Sid is our Hitchcock, our Spielberg, our Ellington.” - Gamespot.com “Sid Meier is a foundation of what gaming is for me today.” - Phil Spencer, head of Xbox “[Meier is] the master of turn-based gaming.” - Will Wright, developer of The Sims “If you ever wished you could stay up all night and hear the most amazing stories from one of the world's most creative people, Sid's memoir is for you. This book is full of incredible tech history and deep insights into what it takes to make a world-class game. But most of all, I loved getting inside Sid’s brain and seeing things from his inventive and wise point of view.” - Jane McGonigal, author of the New York Times bestseller Reality is Broken: How Games Can Change the World and Make Us Better “[A] fascinating look at the legendary designer’s career. It’s full of anecdotes and design principles that Meier has learned over the years.” - Jason Schreier, Bloomberg “[H]eartfelt and informative….[This book] will appeal to old-school gamers with an appreciation for the history of video games.” - Kirkus Reviews About the Author Sid Meier, creator of Civilization, has been honored with virtually every award in the video game industry. A member of the Academy of Interactive Arts and Sciences Hall of Fame and founder of Firaxis Games, Meier lives in Hunt Valley, Maryland.

Before
₱ 1,753.00
Pre-order Item
I confirm to purchase this pre-order item.
Other Choices
Return Policy
For more details please visit our page about Cancellations, Returns, and Refunds