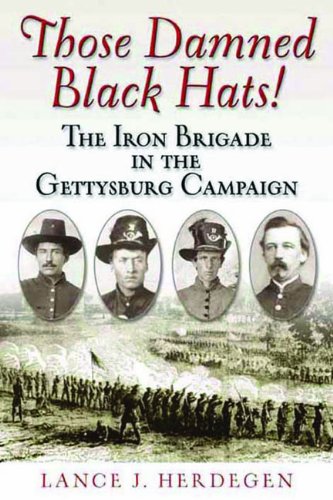 Those Damned Black Hats!: The Iron Brigade in the Gettysburg Campaign

Those Damned Black Hats!: The Iron Brigade in the Features

About Those Damned Black Hats!: The Iron Brigade In The

Product description WINNER FOR OPERATIONAL / BATTLE HISTORY, 2008, ARMY HISTORICAL FOUNDATION DISTINGUISHED BOOK AWARD The Iron Brigade--an all-Western outfit famously branded as The Iron Brigade of the West--served out their enlistments entirely in the Eastern Theater. Hardy men were these soldiers from Indiana, Wisconsin, and Michigan, who waged war beneath their unique black Hardee Hats on many fields, from Brawner’s Farm during the Second Bull Run Campaign all the way to Appomattox. In between were memorable combats at South Mountain, Antietam, Chancellorsville, Mine Run, the Overland Campaign, and the grueling fighting around Petersburg. None of these battles compared with the “four long hours” of July 1, 1863, at Gettysburg, where the Iron Brigade was all but wrecked. Lance Herdegen’s Those Damned Black Hats! The Iron Brigade in the Gettysburg Campaign is the first book-length account of their remarkable experiences in Pennsylvania during that fateful summer of 1863. Drawing upon a wealth of sources, including dozens of previously unpublished or unused accounts, Herdegen details for the first time the exploits of the 2nd, 6th, 7th Wisconsin, 19th Indiana, and 24th Michigan regiments during the entire campaign. On July 1, the Western troops stood line-to-line and often face-to-face with their Confederate adversaries, who later referred to them as “those damned Black Hats.” With the help of other stalwart comrades, the Hoosiers, Badgers, and Wolverines shed copious amounts of blood to save the Army of the Potomac’s defensive position west of town. Their heroics above Willoughby Run, along the Chambersburg Pike, and at the Railroad Cut helped define the opposing lines for the rest of the battle and, perhaps, won the battle that helped preserve the Union. Herdegen’s account is much more than a battle study. The story of the fighting at the “Bloody Railroad Cut” is well known, but the attack and defense of McPherson’s Ridge, the final stand at Seminary Ridge, the occupation of Culp’s Hill, and the final pursuit of the Confederate Army has never been explored in sufficient depth or with such story telling ability. Herdegen completes the journey of the Black Hats with an account of the reconciliation at the 50th Anniversary Reunion and the Iron Brigade’s place in Civil War history. “Where has the firmness of the Iron Brigade at Gettysburg been surpassed in history?” asked Rufus Dawes of the 6th Wisconsin. Indeed, it was a fair question. The brigade marched to Gettysburg with 1,883 men in ranks and by nightfall on July 1, only 671 men were still to be counted. It would fight on to the end of the Civil War, and do so without its all-Western makeup, but never again was it a major force in battle. Some 150 years after the last member of the Iron Brigade laid down his life for his country, the complete story of what the Black Hats did at Gettysburg and how they remembered it is finally available. Review “…much more than a battle study…a first class account of one of the most famous fighting brigades of our American Civil War.” Lone Star Book Review "… brings to life the story of the men who sacrificed so much… Herdegen is able to weave all of the letters and personal accounts into a seamless that is hard to put down. …a great tribute to the men who served in one of the most famous units in the Civil War." Collected Miscellany About the Author Award-winning journalist Lance J. Herdegen is the former director of the Institute of Civil War Studies at Carroll University. He previously worked as a reporter and editor for the United Press International (UPI) news service covering national politics and civil rights. He presently is historical consultant for the Civil War Museum of the Upper Middle West.

Before
₱ 1,918.00
Pre-order Item
I confirm to purchase this pre-order item.
Other Choices
Return Policy
For more details please visit our page about Cancellations, Returns, and Refunds