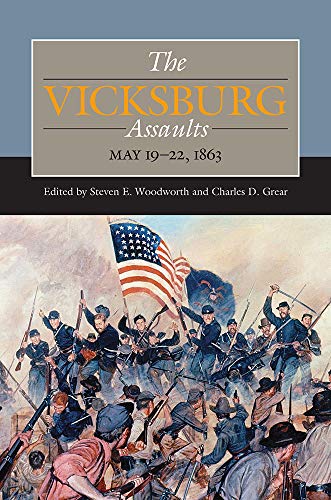 Product Description After a series of victories through Mississippi early in the spring of 1863, General Ulysses S. Grant’s Army of the Tennessee had reached the critical point in its campaign to capture Vicksburg. Taking the city on the hill would allow the Union to control the Mississippi River and would divide the Confederacy in half. Confederate morale was low, and a Union victory in the war appeared close before the start of Grant’s assault against General John C. Pemberton’s Army of Mississippi.   But due to difficult terrain, strong defenses, and uncoordinated movements, the quick triumph Grant desired was unattainable. On the afternoon of May 19, with little rest, preparation, or reconnaissance, Union forces charged the Confederate lines only to be repulsed. A respite between the assaults allowed both sides to reinforce their positions. Early on May 22 the Union artillery sought to soften the stronghold’s defenses before the general attack, but despite the Union forces’ preparation, the fighting proved even more disorganized and vicious. Again Grant failed to move Pemberton. Not wanting to risk more soldiers in a third attack, Grant conceded to the necessity of laying siege. Confederate morale climbed as the Southerners realized they had held their ground against an overwhelming force.   Editors Steven E. Woodworth and Charles D. Grear have assembled five captivating essays that examine Grant’s unsuccessful assaults against Confederate defensive lines around Vicksburg. Ranging from military to social history, the essays further historical debates on prominent topics, such as the reactions of Midwesterners to the first failures of Grant’s Vicksburg campaign. Two essays from opposing sides analyze the controversial decisions surrounding the Railroad Redoubt, the site of the bloodiest fighting on May 22. Another investigates how the tenacity of Texan reinforcements forced Union soldiers to abandon their gains.   Peppered with first-hand observations and bolstered by an impressive depth of research, this anthology is an invitingly written account and comprehensive assessment. By zeroing in on the two assaults, the contributors offer essential clarity and understanding of these important events within the larger scope of the Civil War’s Vicksburg Campaign. Review "Certain to be an enduringly valued and appreciated contribution to the growing library of American Civil War histories, The Vicksburg Assaults, May 19-22, 1863 is an extraordinary and exceptionally well presented compendium of five erudite and informative studies. . . . [It is] a critically essential and core addition to the personal reading lists of Civil War buffs, as well as both community and academic American Civil War collections and supplemental studies curriculums." —James A. Cox, Midwest Book Review “It is hard to beat Steven Woodworth and Charles Grear for collecting talented historians, including themselves, to write in-depth, up-close pieces about aspects of great Civil War battles. They have done it together for the Tennessee Campaign and the battles of Vicksburg, Chattanooga, and Shiloh. Now they have done it again in this volume on the assaults at Vicksburg, yet another top-level contribution to Civil War scholarship.”—John C. Waugh, author of The Class of 1846: From West Point to Appomattox; Stonewall Jackson, George McClellan, and Their Brothers   “The Vicksburg assaults have always been overlooked, coming as they did between Ulysses S. Grant’s brilliant land campaign and the actual siege itself. But they were extremely important. The Vicksburg Assaults packs wonderful analysis and insight into a fitting volume dedicated to some of the Vicksburg campaign’s most important actions.”—Timothy B. Smith, author of Shiloh: Conquer or Perish and The Decision Was Always My Own: Ulysses S. Grant and the Vicksburg Campaign “As a follow-up to The Vicksburg Campaign, March 29–May 18, 1863, The Vicksburg Assaults, May 19–22, 1863, picks up

₱ 2,495.00
Pre-order Item
I confirm to purchase this pre-order item.
Other Choices
Return Policy
For more details please visit our page about Cancellations, Returns, and Refunds