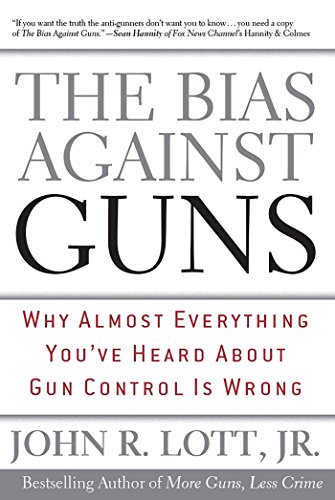 The Bias Against Guns: Why Almost Everything You'Ve Heard About Gun Control Is Wrong

The Bias Against Guns: Why Almost Everything You'Ve Features

About The Bias Against Guns: Why Almost Everything You'Ve

Product Description "If you want the truth the anti–gunners don't want you to know…you need a copy of The Bias Against Guns" — Sean Hannity of Fox News Channel's Hannity & Colmes From Publishers Weekly Following up on his controversial study More Guns, Less Crime, economist Lott argues that widespread gun ownership prevents crime. He cites survey data and news reports to argue that the fear that victims might be armed strongly deters criminals, and that guns are used in self-defense or to ward off criminal threats about 2.3 million times a year. Because they impede law-abiding citizens' access to guns, even mild gun-control regulations-assault weapons bans, "one-gun-a-month" laws-actually increase crime, according to Lott, while right-to-carry laws lower crime and help prevent (or violently terminate) terrorist attacks and "rampage" shootings. Even measures to keep guns away from children, like "gun-free school zones" and "safe storage" laws that require guns to be locked away, are misguided because children need guns for self-defense (he cites news reports of kids as young as 11 gunning down criminals). The benefits of untrammeled gun availability are clear, Lott insists, and only the anti-gun bias and selective reporting by the media and government officials have kept this fact out of public consciousness. Lott supports his bold claims with elaborate statistical analyses that tease sometimes small effects out of the welter of factors that influence crime rates; there are lots of graphs and tables, and much space is devoted to scholarly discussions of statistical methodologies. Many readers will find these sections rough going, but Lott's provocative thesis is sure to stir interest among second-amendment stalwarts and gun-control supporters alike. Copyright 2003 Reed Business Information, Inc. About the Author John R. Lott, Jr., Ph.D, called by Newsweek the “Gun Crowd’s Guru,” is an author, lecturer, and nationally-famous economist. Nobel laureate Milton Friedman said: “John Lott has few equals as a perceptive analyst of controversial public policy issues.” He has held research and/or teaching positions at the University of Chicago, Yale University, Stanford, UCLA, Wharton, and Rice, and was the chief economist at the United States Sentencing Commission during 1988 and 1989. A FoxNews.com columnist, Lott is the author of eight previous books, including More Guns, Less Crime and Freedomnomics. He received his Ph.D. in economics from UCLA in 1984. Lott is also the founder of the popular Crime Prevention Research Center (CPRC)—a research and education organization dedicated to conducting academic quality research on the relationship between laws regulating the ownership or use of guns, crime, and public safety; educating the public on the results of such research; and supporting other organizations, projects, and initiatives that are organized and operated for similar purposes.

The War On Guns: Arming Yourself Against Gun Contr...

Before
₱ 1,884.00
Pre-order Item
I confirm to purchase this pre-order item.
Other Choices
Return Policy
For more details please visit our page about Cancellations, Returns, and Refunds