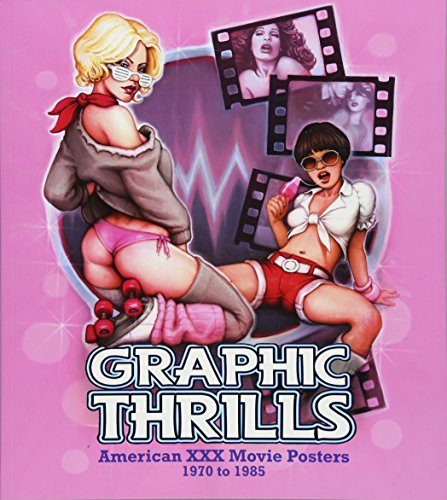 Product description With catchy titles like Carnal Olympics, Ultra Flesh, Insatiable, Deep Throat, and Dominatrix Without Mercy, the 1970s and early '80s were the golden era of the American hardcore sex film. Picking up where the low-budget stag loops and softcore sexploitation pictures left off, this legendary cycle of adult filmmaking was distinguished by both the overall quality of the movies themselves and also the advertising that promoted them. Real movies made by directors with a vision, performed by passionate actors, backed up with genuine plots, drama, and imagination that hit peaks the industry hasn't seen before or since. This was the age of porno chic. Theatrical film posters, then and now, seduce the public into taking part in a fantasy world. This first volume of Graphic Thrills proudly assembles 140 of these debauched and innuendo-packed one-sheets between its covers, with glorious unabashed sexuality dripping from every page. These joyous and colourful odes to sultry sin hung in the lobbies and front windows of the porno theaters and grindhouses of yesteryear. Lit by neon and shimmering marquee lights, each come-on promised curious patrons lurid drama, kinky excitement, easy love, and a myriad of exotic fantasies come true. In Graphic Thrills, the epoch of the American XXX movie poster and the no-holes-barred erotica it promised is laid bare and exposed. A writer for New York's infamous Screw magazine and creator of the underground trash film 'zine Cinema Sewer, author Robin Bougie probes the history of these classic films, interviews the people who made them, and provides candid in-depth reviews. It's time to drop your defences, turn on, and prepare to play dirty... get ready for Graphic Thrills! Review "Bougie explores the scuzzier side of the cinematic spectrum with wit, insight, and often surprising levels of scholarship and research." -- Don Gaurisco, www.schlockmania.com "nut-busting moments of gonzo weirdness and cinematic nostalgia..." -- Rondal Scott, www.strangekidsclub.com About the Author Robin Bougie began Cinema Sewer magazine, an ode to the seamier side of film and the culture which surrounds it, in 1997. The magazine found an audience amongst film fans looking for something totally different. FAB Press have been working alongside Bougie since 2009, and to date have published four volumes in the popular Cinema Sewer book series. Graphic Thrills is the latest result of this wildly successful creative collaboration. Excerpt. © Reprinted by permission. All rights reserved. Take a close look at the names that litter the cast-lists of these posters. Go ahead, flip through. I'll wait here for you. Ignoring the akas, for the most part, they are the same 25 names over and over again. The same group of individuals playing dress-up and pretending to be different people. Sure, there was a little squabbling like you have between brothers and sisters in any family, but for the most part the early New York, San Francisco and Los Angeles scenes were very tight knit and dependent upon one another for support. And while there were those that dropped out or died too young, I've found just as many highly-bonded friendships that have lasted these once young performers into their sixties and seventies. I knew plenty about the history of these movies when I started writing this book, but what I didn't know about was the posters themselves. Like most nerdy film fans, I have a sizeable movie memorabilia collection, but there was a vacant lot in my knowledge about the people who actually created the art and the advertising campaigns for these smutty classics. Researching it isn't easy. Very little of the art itself seems to be signed, and 'poster artist' remains as of this date the only major film credit that the Internet Movie Database doesn't even bother to have a listing for. Not only that, but no other film books or websites have ever given credit to the painters, photographers and designers involved in the creation of hardcore film advertising. It really seems to be the last thing left to be unveiled and a totally overlooked part of the story. I assumed picking the brains of directors would turn up all kinds of clues, but for the most part it did not. Unfortunately, many of the living filmmakers didn't have anything to do with the marketing of their movies. The hiring of the artists or advertising agencies was a task that was often left to the producers who were, for the most part, a bunch of older men even at the time, and are almost all dead now. Being that the industry that they worked in was only semi-legal (and in some early instances had connections to organized crime), none of these men allowed themselves to be interviewed by any of the trade magazines in the 1970s and 1980s, and many of their operational secrets died with them. I began to realize that in many cases, the artists who created this work simply do not want to be found...

X-rated: Adult Movie Posters Of The 60s And 70s