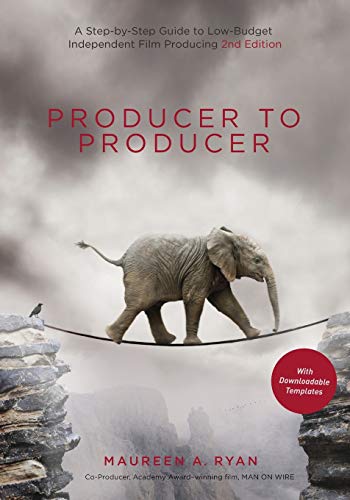 Producer to Producer: A Step-by-Step Guide to Features

About Producer To Producer: A Step-by-Step Guide To

Product Description This is a comprehensive bible to low-budget film producing for emerging and professional producers. Structured to guide the reader through production meetings, every aspect of the film-production pro-cess is outlined in detail. Invaluable checklists ― which begin 12 weeks before shooting and continue through principal (and secondary) photography and postproduction ― keep the filmmaker on track and on target. Ryan is co-producer of James Marsh’s Man on Wire, winner of the 2009 Academy Award for Best Documentary About the Author Maureen A. Ryan is a New York–based producer concentrating on narrative and documentary fea-ture films. She is co-producer of James Marsh’s Man on Wire, winner of the 2009 Academy Award for Best Documentary and the 2009 BAFTA for Best British Film. She is also the co-producer of Project Nim and the production advisor on the Netflix 10-part series Making a Murderer by Moira Demos and Laura Ricciardi. She is co-executive producer of the television pilot Stanistan for USA Network / Univer-sal Cable Productions. She is the executive producer on The Penny Black, a nonfiction episodic series with a pilot episode already produced, and is the re-creations producer for both Johanna Hamilton’s new feature documentary, 1971, and for Alex Gibney’s feature documentary, Mea Maxima Culpa: Si-lence in the House of God. The author is also a producer of the independent narrative film BOMBER, which premiered at the SXSW Film Festival and won numerous film festival awards. Ryan’s other producer credits include Red Flag, The Gates, Grey Gardens: From East Hampton to Broadway, The Team, The King, Torte Bluma, Last Hand Standing, and Wisconsin Death Trip. Additional awards have included a Peabody Award, three AICP Awards, a Billboard Award, a Freddie, a CMA Award, an ACM Award, 11 Addys, and 5 Tellys. Ryan is the Chair / Associate Professor of Columbia University’s Graduate Film program and holds an MFA (Film) from Columbia’s School of the Arts and a BA (Economics) from Boston College. Ryan has taught film seminars domestically and internationally in Toronto, Canada; Amman, Jordan; Beijing, China; Brussels, Belgium; and Kinshasa, Congo (on a Fulbright grant). The first edition of Producer to Producer has been translated into Japanese and Chinese. The companion website is www.ProducerToProducer.com.

So You Want To Be A Producer

Before
₱ 1,099.00
Pre-order Item
I confirm to purchase this pre-order item.
Other Choices
Return Policy
For more details please visit our page about Cancellations, Returns, and Refunds