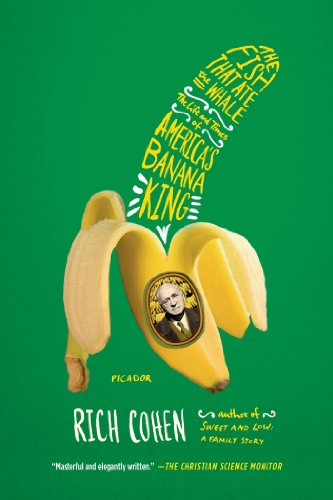 The Fish That Ate the Whale: The Life and Times of America's Banana King

The Fish That Ate the Whale: The Life and Times of Features

About The Fish That Ate The Whale: The Life And Times Of

Product Description Named a Best Book of the Year by the San Francisco Chronicle and The Times-Picayune The fascinating untold tale of Samuel Zemurray, the self-made banana mogul who went from penniless roadside banana peddler to kingmaker and capitalist revolutionary When Samuel Zemurray arrived in America in 1891, he was tall, gangly, and penniless. When he died in the grandest house in New Orleans sixty-nine years later, he was among the richest, most powerful men in the world. Working his way up from a roadside fruit peddler to conquering the United Fruit Company, Zemurray became a symbol of the best and worst of the United States: proof that America is the land of opportunity, but also a classic example of the corporate pirate who treats foreign nations as the backdrop for his adventures. Zemurray lived one of the great untold stories of the last hundred years. Starting with nothing but a cart of freckled bananas, he built a sprawling empire of banana cowboys, mercenary soldiers, Honduran peasants, CIA agents, and American statesmen. From hustling on the docks of New Orleans to overthrowing Central American governments and precipitating the bloody thirty-six-year Guatemalan civil war, the Banana Man lived a monumental and sometimes dastardly life. Rich Cohen's brilliant historical profile The Fish That Ate the Whale unveils Zemurray as a hidden power broker, driven by an indomitable will to succeed. Review “Rich Cohen books constitute a genre unto themselves: pungent, breezy, vividly written psychodramas.” ―The New York Times Book Review“Lively and entertaining.” ―The Boston Globe“This biography of the complex and often contradictory figure of Zemurray is Cohen's most engaging and entertaining book to date.” ―Chicago Tribune Printers Row Journal“This is a rollicking but brilliantly researched book about one of the most fascinating characters of the twentieth century. I grew up in New Orleans enthralled by tales of Sam Zemurray, the banana peddler who built United Fruit. This book recounts, with delightful verve, his military and diplomatic maneuvers in Central America and his colorful life and business practices.” ―Walter Isaacson, president and CEO of the Aspen Institute and author of Steve Jobs“Sam ‘the Banana Man' Zemurray was a larger-than-life character. Rich Cohen is a superb storyteller. Put them together and you have a startling and often hilarious account of one of the forgotten heroes (and villains) of the American empire.” ―Zev Chafets“In Rich Cohen's masterful and enthralling narrative, one man's character is not simply his fate but also that of a nation. With verve, wit, and page-turning excitement, The Fish That Ate the Whale unfolds as compelling story of bold success coupled with reckless ambition. I loved this book.” ―Howard Blum, author of The Floor of Heaven and American Lightning“If this book were simply the tale of a charismatic and eccentric banana mogul, that would have been enough for me--especially with the masterful Rich Cohen as narrator. But it's not. It is also the story of capitalism, psychology, immigration, public relations, colonialism, food, O. Henry's shady past, and the meaning of excellence.” ―A. J. Jacobs, author of The Year of Living Biblically“What a story, and what a storyteller! You'll never see a banana--and, for that matter, America--the same way again.” ―Aleksandar Hemon, author of The Lazarus Project“There's a lot to learn about the seedier side of the ‘smile of nature' in this witty tale of the fruit peddler-turned-mogul.” ―Chloë Schama, Smithsonian“Cohen ... gives us the fascinating tale of ‘Sam the Banana Man,' a poor Russian Jew who emigrated to Alabama as a teenager and ended up controlling much of Central America . . . Rich Cohen books constitute a genre unto themselves: pungent, breezy, vividly written psychodramas about rough-edged, tough-minded Jewish machers who vanquish their rivals, and sometimes change the world in the process. Within this specialized contex

The Measure Of My Days: One Woman's Vivid, Endurin...

Before
₱ 963.00
Pre-order Item
I confirm to purchase this pre-order item.
Other Choices
Return Policy
For more details please visit our page about Cancellations, Returns, and Refunds