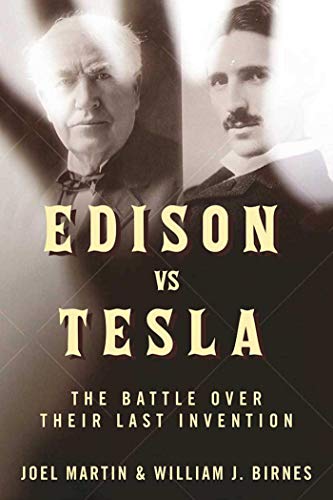 Edison vs. Tesla: The Battle over Their Last Invention

Edison vs. Tesla: The Battle over Their Last Features

About Edison Vs. Tesla: The Battle Over Their Last

Product Description Thomas Edison closely following the alternative physics work of Albert Einstein and Max Planck, convincing him that there was an entire reality unseen by the human eye. This led to the last and least-known of all Edison’s inventions, the spirit phone. His former associate, now bitter rival, Nikola Tesla, was also developing at the same time a similar mysterious device. Edison vs. Tesla examines their quest to talk to the dead. It reveals: Edison’s little-known near-death experience formed his theory that animate life forms don’t die, but rather change the nature of their composition. It is this foundational belief that drove him to proceed with the spirit phone. Tesla monitored Edison’s paranormal work, with both men racing to create a device that picked up the frequencies of discarnate spirits, what today is called EVP (Electronic Voice Phenomenon). Both men were way ahead of their time, delving into artificial intelligence and robotics. Although mystery and lore surround the details of the last decade of Edison’s life, many skeptics have denied the existence of the mysterious spirit phone. The authors have researched both Edison’s and Tesla’s journals, as well as contemporary articles and interviews with the inventors to confirm that tests were actually done with this device. They also have the full cooperation of the Charles Edison fund, affording them access to rare photos and graphics to support their text. Edison vs. Tesla sheds light on this weird invention and demonstrates the rivalry that drove both men to new discoveries. Review “Unlike many scientists, Tesla was not afraid to conduct research on something considered outlandish. If his interest was roused, Tesla would devote a tremendous amount of time in the attempt to figure it out. This is how Tesla became may have become involved in what is now known as Electronic Voice Phenomena . . . something unheard of at the time.” —Tim Schwartz, editor of the journals of Nikola Tesla “Had Edison been granted only a few more short years, we might even now be communicating with departed loved ones—or even Edison himself. If we could, perhaps Edison would still be adding new inventions to his already illustrious string of accomplishments, thanks to his very own spirit communication device.” —Paul H. Smith, PhD; author, Reading the Enemy’s Mind: Inside Star Gate: America’s Psychic Espionage Program "If you are hoping to make this Halloween special by communing with the dead, or if you are just interested in the topic, you should definitely read up on Edison’s spirit phone, and this book is a great way to do that." - The Huffington Post About the Author Joel Martin is the bestselling author of paranormal titles, as well as a radio and television host. Joel has interviewed many of this country's mediums, channelers, and scholars in the field. He and Birnes collaborated on several titles including The Haunting of America, and the Skyhorse title Edison vs. Tesla. Joel & Bill coproduced "Presidential Prophecies" on the A&E Network. Joel lives in Babylon, NY. William J. Birnes is the New York Times bestselling author of The Day After Roswell and many other books including the Skyhorse titles Dr. Feelgood, Wounded Minds, and The Big Book of UFO Facts, Figures & Truth. He was the consulting producer, writer, and lead host of the History Channel's "UFO Hunters," and the publisher of UFO Magazine from 1998 through 2014. He lives in Lambertville, NJ.

Tesla Vs Edison: The Life-Long Feud That Electrifi...

Before
₱ 1,151.00
Pre-order Item
I confirm to purchase this pre-order item.
Other Choices
Return Policy
For more details please visit our page about Cancellations, Returns, and Refunds