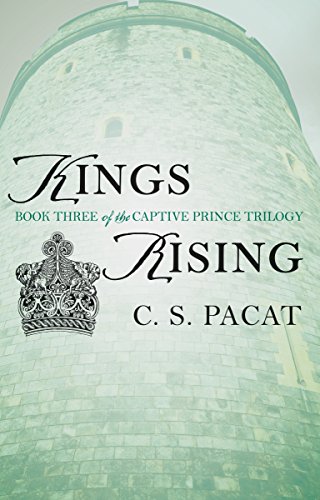 Product Description The stunning conslusion of worldwide phenomenon—from the boldly original author of Captive Prince and Prince’s Gambit.His identity now revealed, Damen must face his master Prince Laurent as Damianos of Akielos, the man Laurent has sworn to kill.   On the brink of a momentous battle, the future of both their countries hangs in the balance. In the south, Kastor's forces are massing. In the north, the Regent's armies are mobilising for war. Damen's only hope of reclaiming his throne is to fight together with Laurent against their usurpers.   Forced into an uneasy alliance the two princes journey deep into Akielos, where they face their most dangerous opposition yet. But even if the fragile trust they have built survives the revelation of Damen’s identity—can it stand against the Regents final, deadly play for the throne? Review Praise for C. S. Pacat and the Captive Prince Trilogy “You will be completely enthralled and on edge.”— USA Today “Have you read Captive Prince? If you haven’t, what are you waiting for?”—HeroesandHeartbreakers.com “The cumulative effect of reading them back to back is mind blowing.”—Dear Author “Pacat’s powerful debut, a blend of intense erotica and political fantasy, is disturbing and intriguing in equal measure...The intricacy of the political entanglements gives depth to the novel’s erotic turmoil...Fans of Jacqueline Carey’s Kushiel series will eat this up with a spoon.”— Publishers Weekly “Fans of Pacat’s internet-serial sensation will need no convincing of the merits of this series, but new readers should take note—this book lives up to every word of praise it has garnered. The lush setting, full of intricate historical detail, engaging decadence and ruthless scheming, will draw many, but it’s Pacat’s characters...who’ll surely keep readers captive. Their tenuous, fractious relationship is the heart and soul of this trilogy, and thankfully, readers will not have long to wait between installments in order to watch it unfold.”— RT Book Reviews About the Author C. S. Pacat is the author of the Captive Prince trilogy. Born in Australia and educated at the University of Melbourne, she has since lived in a number of different cities, including Tokyo and Perugia. She currently resides and works in Melbourne. Excerpt. © Reprinted by permission. All rights reserved. KINGS RISING C. S. Pacat is the author of the Captive Prince trilogy. She has lived in a number of different cities including Tokyo and Perugia. She is a graduate of the University of Melbourne, and was born in Melbourne, where she currently lives and writes. About the Author Also in The Captive Prince trilogy Title Page Copyright Dedication Map Characters CHAPTER ONE CHAPTER TWO CHAPTER THREE CHAPTER FOUR CHAPTER FIVE CHAPTER SIX CHAPTER SEVEN CHAPTER EIGHT CHAPTER NINE CHAPTER TEN CHAPTER ELEVEN CHAPTER TWELVE CHAPTER THIRTEEN CHAPTER FOURTEEN CHAPTER FIFTEEN CHAPTER SIXTEEN CHAPTER SEVENTEEN CHAPTER EIGHTEEN CHAPTER NINETEEN Acknowledgements CHARACTERS CHAPTER ONE ‘DAMIANOS.’ Damen stood at the base of the dais steps as his name spread in tones of shock and disbelief over the courtyard. Nikandros knelt before him, his army knelt before him. It was like coming home, until his name, rippling outwards over the ranks of the gathered Akielon soldiers, hit the Veretian commoners thronging the edges of the space, where it changed. The shock was different, a doubled shock, a rippling impact now, of anger, of alarm. Damen heard the first voice in outcry, a swell of violence, a new word now in the mouths of the crowd. ‘Prince-killer.’ A hiss of a rock, thrown. Nikandros came up off his knees, drawing his sword. Damen flung out a hand in a motion for halt, stopping Nikandros instantly, his sword showing a half-foot of Akielon steel. He could see the confusion on Nikandros’s face, as the courtyard around them began to disintegrate. ‘Damianos?’ ‘Order your men to hold,’ said Damen, even as the sharp sound

Before
₱ 1,117.00
Pre-order Item
I confirm to purchase this pre-order item.
Other Choices
Return Policy
For more details please visit our page about Cancellations, Returns, and Refunds