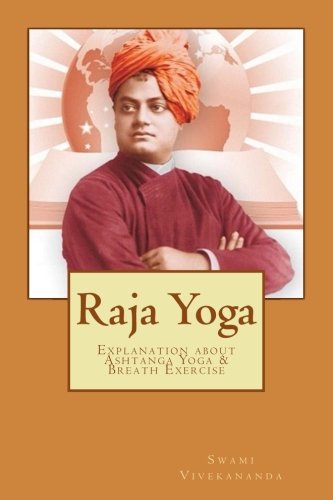 See more product information!
Number Of Pages 224
Publication Date 2015-09-17
-
Product is Out of Stock as of Apr, 24 2020 . Used item/s available.
Want to monitor availability?
of brand new stock?
or
Need this item ASAP?
Check if this is available on Amazon
or available in other sites
Send us the link so we can buy for you

Explanation of Swami Vivekananda about Ashtanga Yoga and Patanjali's yoga aphorisms. Since the dawn of history, various extraordinary phenomena have been recorded as happening amongst human beings. Witnesses are not wanting in modern times to attest to the fact of such events, even in societies living under the full blaze of modern science. But what do they imitate? It is not the sign of a candid and scientific mind to throw overboard anything without proper investigation. Surface scientists, unable to explain the various extraordinary mental phenomena, strive to ignore their very existence. They are, therefore, more culpable than those who think that their prayers are answered by a being, or beings, above the clouds, or than those who believe that their petitions will make such beings change the course of the universe. The latter have the excuse of ignorance, or at least of a defective system of education, which has taught them dependence upon such beings, a dependence which has become a part of their degenerate nature. The former have no such excuse. For thousands of years such phenomena have been studied, investigated, and generalised, the whole ground of the religious faculties of man has been analysed, and the practical result is the science of Raja-Yoga. Raja-Yoga does not, after the unpardonable manner of some modern scientists, deny the existence of facts which are difficult to explain; on the other hand, it gently yet in no uncertain terms tells the superstitious that miracles, and answers to prayers, and powers of faith, though true as facts, are not rendered comprehensible through the superstitious explanation of attributing them to the agency of a being, or beings, above the clouds. It declares that each man is only a conduit for the infinite ocean of knowledge and power that lies behind mankind. It teaches that desires and wants are in man, that the power of supply is also in man; and that wherever and whenever a desire, a want, a prayer has been fulfil

Defeating Scrooge: How To Harness The Power Of Chr...

Astrology, Psychology, And The Four Elements: An E...

The Shamanic Way Of The Bee: Ancient Wisdom And He...

Encyclopedia Of Spirits: The Ultimate Guide To The...

Before
₱ 3,171.00
Pre-order Item
I confirm to purchase this pre-order item.
Other Choices
Return Policy
For more details please visit our page about Cancellations, Returns, and Refunds