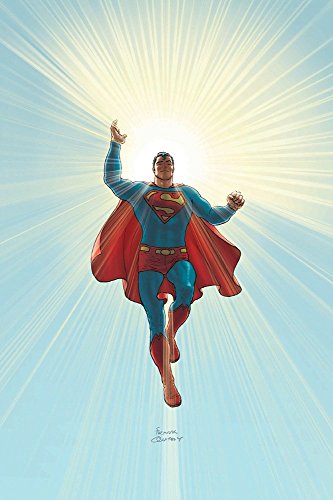 About Absolute All Star Superman

Product Description Witness the Man of Steel in exciting new adventures featuring Lex Luthor, Jimmy Olsen, Lois Lane, Bizarro, and more! The Man of Steel goes toe-to-toe with Bizarro, his oddball twin, and the new character Zibarro, also from the Bizarro planet. And Superman faces the final revenge of Lex Luthor - in the form of his own death! Writer Grant Morrison teams with artist Frank Quitely on this spectacular reimagining of the Superman mythos, from The Man of Steel's origin to his greatest foes and beyond. About the Author Writer Grant Morrison is known for his innovative work on comics from the graphic novel Arkham Asylum to acclaimed runs on Animal Man and Doom Patrol, as well as his subversive creator-owned titles such as The Invisibles, Seaguy, and WE3. Grant has also written best-selling runs on JLA, Seven Soldiers of Victory, and New X-Men, and helped to reinvent the DC Universe in The Multiversity, All Star Superman, 52, Batman, Batman & Robin and Batman, Inc. Frank Quitely was born in Glasgow in 1968. Some of his most notable work has been for DC Comics/Vertigo, including Flex Mentallo, Batman: The Scottish Connection, The Kingdom: Offspring, JLA: Earth 2, The Invisibles, Transmetropolitan, The Authority, The Sandman: Endless Nights, WE3, All-Star Superman and Batman & Robin. For Marvel Comics, he's worked on New X-Men with frequent collaborator Grant Morrison. He is also a sought-after covers artist, having drawn for Negative Burn, Judge Dredd Megazine, Classic 2000 AD, Jonah Hex, Books of Magick: Life During Wartime, Bite Club, American Virgin and All-Star Batman. He lives in Glasgow with his wife and three children. Neal Adams was born June 6, 1941 in New York City. He attended Manhattan's High School of Industrial Art and, while still a student, found work ghosting the Bat Masterson syndicated newspaper strip and drawing gag cartoons for Archie Comics. Neal received his own comic strip based on the popular TV series Ben Casey in 1962. The strip ran until 1965 at which time Neal made the move to comics for Warren Publishing and DC Comics. Neal's realistic style on Deadman and Green Lantern/Green Arrow, at odds with the more cartoony comics of the day, made him an immediate star. He became DC's premier cover artist, contributing radical and dynamic illustrations to virtually the company's entire line. Neal's work has also appeared in Marvel's X-Men, The Avengers, and Thor, on paperback book covers, and on stage, as the art director for the Broadway science fiction play, Warp. In the 1970s, Neal and partner (and frequent inker) Dick Giordano started the art agency Continuity Associates out of which came, in the 1980s, Continuity Comics. Neal is the winner of several Alley, Shazam, and Inkpot Awards, and was inducted into the Harvey Awards' Jack Kirby Hall of Fame in 1999.

Before
₱ 7,219.00
Pre-order Item
I confirm to purchase this pre-order item.
Other Choices
Return Policy
For more details please visit our page about Cancellations, Returns, and Refunds