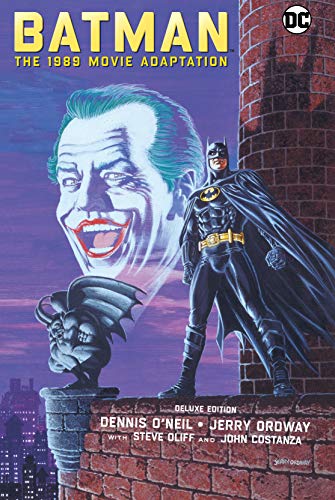 Product Description WHERE DOES HE GET THOSE WONDERFUL TOYS? When Warner Bros.' Batman hit theaters in the summer of 1989, director Tim Burton's masterpiece of action, atmosphere, and art direction smashed box office predictions and rewrote the conventional wisdom on what comic book movies could achieve--both financially and artistically. In the wake of the film's success, DC Comics--keepers of the Dark Knight Detective's foundational four-color adventures--set out to bring as many of those moviegoers as possible into comic bookstores, and their first step was an official comics adaptation of Burton's newly minted blockbuster. Crafted by comics legends Dennis O'Neil and Jerry Ordway and released at a time when home video was still in its infancy, Batman: The Official Comic Adaptation of the Warner Bros. Motion Picture became the "rewatchable" version of the movie for countless fans--and for many, it opened the door to a whole new world of sequential storytelling. Batman: The 1989 Movie Adaptation Deluxe Edition presents this celebrated retelling of the Academy Award-winning film for the first time in a dedicated hardcover volume. This comprehensive 30th-anniversary collection features the complete original title as well as high-quality scans of Ordway's original, never-before-seen, black-and-white artwork for every page. About the Author Dennis O'Neil began his career as a comic book writer in 1965 at Charlton, where then-editor Dick Giordano assigned him to several features. When Giordano moved to DC, O'Neil soon followed. At DC, O'Neil scripted several series for Giordano and Julius Schwartz, quickly becoming one of the most respected writers in comics. O'Neil earned a reputation for being able to "revamp" such characters as Superman, Green Lantern, Captain Marvel, and Batman, whom O'Neil brought back to his roots as a dark, mysterious, gothic avenger. Besides being the most important Batman writer of the 1970s, O'Neil served as an editor at both Marvel and DC. After a long tenure as Group Editor of the Batman line of titles, he retired to write full-time. Jerry Ordway is a writer and artist whose work has spanned over three decades and every major comic book publisher. He is best known for his work on Superman, Action Comics, Wonder Woman, The Power of SHAZAM!, Crisis On Infinite Earths, and Infinite Crisis, amongst dozens of titles.

Before
₱ 1,744.00
Pre-order Item
I confirm to purchase this pre-order item.
Other Choices
Return Policy
For more details please visit our page about Cancellations, Returns, and Refunds