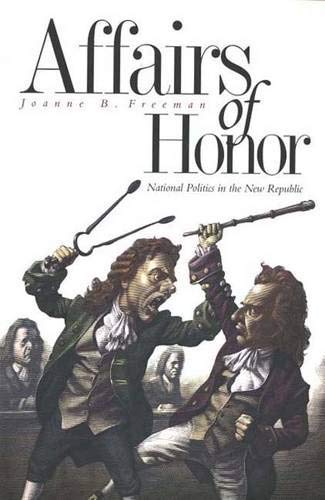 Affairs of Honor: National Politics in the New Republic

See more product information!
-
Save 46%
Before
₱ 1,807
Price Tracker
This item ships longer than average delivery time. Click here to open chat and know how long it will take.
*Used/Collectible item/s available. *Price and Stocks may change without prior notice
Pay with

Affairs of Honor: National Politics in the New Features

About Affairs Of Honor: National Politics In The New

The more things change, the more they remain the same. Modern American politics may often resemble a demented circus, but thus it has always been. So writes historian Joanne Freeman in this vigorous account of America's first national leaders, those entrusted with creating a nation unlike any other on Earth, one "egalitarian, democratic, representative, straightforward, and virtuous in spirit, public-minded in practice." The reality was less noble than all that; as Freeman writes, the first postrevolutionary Congress, convened in the spring of 1789, was marked by regional and private rivalries, mudslinging, acrimony, favor-seeking, and backroom bargaining, all of which produced far more discord than unity. In that climate, as John Adams and George Washington would often complain, these early politicians were more interested in "their interests, careers, reputations, and pocketbooks" than in matters of the public good. Yet, Freeman suggests, it could scarcely have been otherwise; an "emotional logic" governed the governors, involving a shared code of honor that drew no lines between the personal with the political, so that any disagreement over policy was liable to turn into a duel or campaign of slander; a day-to-day style of conduct in which panic, paranoia, and shrill accusations were the norm; a fortress mentality in which anyone who was not a sworn friend was a sworn enemy. Amazingly, it sometimes seems, they made a nation. Freeman's well-crafted study makes a useful corrective to the view that contemporary politics represents a freefall from some golden age, and it adds much to our understanding of America's past. --Gregory McNamee

The Field Of Blood: Violence In Congress And The R...

The Essential Hamilton: Letters & Other Writings

₱ 1,304.00
Pre-order Item
I confirm to purchase this pre-order item.
Big Discount!
This product, Affairs of Honor: National Politics in the New Republic, is currently discounted at 46% off! We don't know when it will go back to its original price so order now to secure it at this price! We'll make sure to order it immediately!
Other Choices
Return Policy
For more details please visit our page about Cancellations, Returns, and Refunds