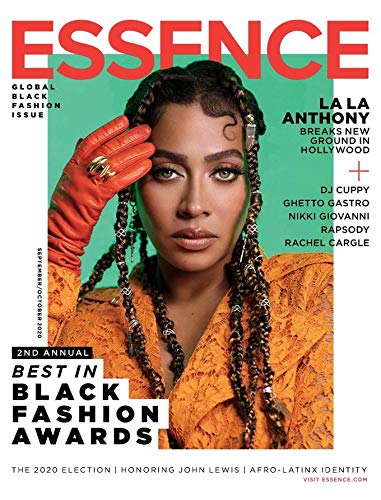 Who Reads Essence? Essence inspires Black women of all shades and shapes to lead bold, fulfilling lives. We encourage their passions and dreams and celebrate their community. As a trusted friend, Essence reflects their best selves and motivates them to live without limits. Essence reaches 8.1 million readers each month and reaches 37% of African American women in one issue. In 2010, Essence will celebrate its 40th anniversary of being the Spirit of Black Women. What You Can Expect in Each Issue: In every issue, Essence covers the information the African American woman wants to read and learn about from a trusted advisor including Celebrity, Fashion and Beauty, News, Careers, Finance, Healthy Living (health, fitness, food and relationships) and Spirituality. Special features include: "Will you Marry Me" - Real men pop the question in Essence Black Hollywood Special - a celebration of Black talent in Hollywood Black Music Celebration - a celebration of the most influential executives, performers, directors, festivals, tours etc. Do-Right Man - 100 men in-book and online Plus Fall Fashion and Beauty, Heatlh and Wellness, Holiday Entertaining and Faith and Family Magazine Layout: Essence magazine strives to be as visually arresting as it is mentally stimulating. It has a 39-year-old tradition of featuring beautiful and iconic images of Black women, men and couples who are exclusively photographed for the magazine. Within, there is a fair split of text to images, always with the goal of marrying both into inviting layouts that move the reader along effortlessly from page to page. Center-of-book features are particularly lush story spreads that are engaging both visually and intellectually. Click on any image below to see select pages: Past Issues: Contributors Bishop TD Jakes, pastor for the Potter's House in Dallas--a 30,000 member congregation--pens the last page "Get Lifted" in every issue. Spirituality is of great importance to the Essence reader. Charlayne Hunter-Gault (Africa Bureau Chief) is an award-winning journalist (formerly on the MacNeil/Lehrer Report on PBS) and writer who lives on the continent of Africa and who provides insight and commentary on issues of interest affecting the African diaspora. Comparisons to Other Magazines: Essence speaks directly and specifically to the AA woman in a trusted and candid voice. Essence spans both the African American set and the fashion and beauty set. Essence has the highest engagement according to MRI compared to the fashion and beauty set. Advertisers: Essence's has a wide range of brand partners including Giorgio Armani, CoverGirl, GAP, Mastercard, Ford, McDonalds, Target, Coca Cola, SoftSheen Carson, Tacori, Aveeno, Caress, and Pantene. Awards: 2008 Henry R. Luce Awards: Magazine of the Year, Public Service for our September 2007 article “What Happened to My Child?” about missing children, Best Web Innovation finalist to Essence.com for “Will You Marry Me?” Essence was honored with the first ever Advertising Age’s American Magazine Vanguard Award, which recognizes magazines that are innovating smartly beyond print. Essence was named by MIN (Media Industry Newsletter) as a winner of its “Most Engaged Media Brands”, awarded to magazines that display the strongest bond between the brand, its readers and its advertisers. Our solutions-based programs, combined with our editorial excellence and our responsive audience, make Essence the top choice for marketers who want to reach African-American women. Year after year, Essence has consistently taken top honors in magazine journalism in the news feature and investigative reporting categories.

Get Price
Pre-order Item
I confirm to purchase this pre-order item.
Other Choices