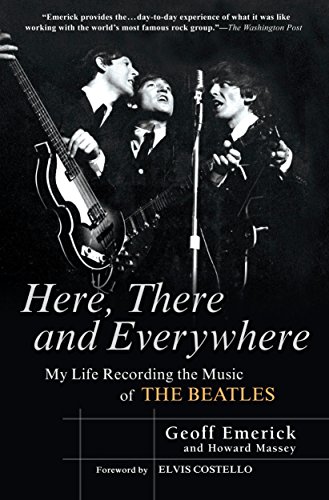 Here, There and Everywhere: My Life Recording the Music of the Beatles

Here, There and Everywhere: My Life Recording the Features

About Here, There And Everywhere: My Life Recording The

Product Description Geoff Emerick became an assistant engineer at the legendary Abbey Road Studios in 1962 at age fifteen, and was present as a new band called the Beatles recorded their first songs. He later worked with the Beatles as they recorded their singles She Loves You and I Want to Hold Your Hand, the songs that would propel them to international superstardom. In 1964 he would witness the transformation of this young and playful group from Liverpool into professional, polished musicians as they put to tape classic songs such as Eight Days A Week and I Feel Fine. Then, in 1966, at age nineteen, Geoff Emerick became the Beatles chief engineer, the man responsible for their distinctive sound as they recorded the classic album Revolver, in which they pioneered innovative recording techniques that changed the course of rock history. Emerick would also engineer the monumental Sgt. Pepper and Abbey Road albums, considered by many the greatest rock recordings of all time. In Here, There and Everywhere he reveals the creative process of the band in the studio, and describes how he achieved the sounds on their most famous songs. Emerick also brings to light the personal dynamics of the band, from the relentless (and increasingly mean-spirited) competition between Lennon and McCartney to the infighting and frustration that eventually brought a bitter end to the greatest rock band the world has ever known. Review Unlike other books detailing the groups recording history, Emericks provides the kind of day-to-day experience of what it was like working with the worlds most famous rock group. ( The Washington Post) There have been hundreds of books about the Beatles, but only a handful from insiders. And for seven years, Emerick was a witness to history who worked alongside the Fab Four and producer George Martin. ( The Plain Dealer, Cleveland) About the Author Geoff Emerick joined Abbey Road Studios as an assistant engineer in 1962 and was promoted to full engineer in 1966, leaving to build the Beatles’ Apple Recording Studios in 1969. After the dissolution of the Beatles, he continued to engineer for Paul McCartney, as well as artists such as Elvis Costello, America, Jeff Beck, and Art Garfunkel. He has won four Grammy Awards, including a Technical Grammy Award in 2003. Excerpt. © Reprinted by permission. All rights reserved. Here, There and Everywhere Here, There and Everywhere My Life Recording the Music of THE BEATLES Geoff Emerick and Howard Massey GOTHAM BOOKS Foreword by Elvis Costello PROLOGUE 1966 CHAPTER 1 Hidden Treasure CHAPTER 2 Number Three Abbey Road CHAPTER 3 Meeting the Beatles CHAPTER 4 Early Sessions CHAPTER 5 Beatlemania CHAPTER 6 A Hard Day’s Night CHAPTER 7 Innovation and Invention: The Making of Revolver CHAPTER 8 It’s Wonderful to Be Here, It’s Certainly a Thrill: Sgt. Pepper Begins CHAPTER 9 A Masterpiece Takes Shape: The Pepper Concept CHAPTER 10 All You Need Is Love…and a Long Vacation: Magical Mystery Tour and Yellow Submarine CHAPTER 11 The Day I Quit: The Making of the White Album CHAPTER 12 The Calm After the Storm: Life After the White Album CHAPTER 13 An Anvil, a Bed, and Three Gunslingers: The Making of Abbey Road CHAPTER 14 And in the End: The Final Stroll Across Abbey Road CHAPTER 15 Fixing a Hole: The Apple Years CHAPTER 16 Drainage, Lizards, and Monsoons: The Making of Band On The Run CHAPTER 17 Life After the Beatles: From Elvis to the Anthologies EPILOGUE I Read the News Today, Oh Boy Acknowledgments Index • Foreword • by Elvis Costello It has been ten years since Geoff Emerick and I last worked together. One of my favorite memories of that last occasion is Geoff politely cursing the recording desk when it proved impossible to make it distort in an attractive and interesting fashion. So many of the sounds in today’s recording studios come out of little boxes that merely imitate the sonic innovations of the past

All You Need Is Ears: The Inside Personal Story Of...

Sound Man: A Life Recording Hits With The Rolling ...

Before
₱ 1,331.00
Pre-order Item
I confirm to purchase this pre-order item.
Other Choices
Return Policy
For more details please visit our page about Cancellations, Returns, and Refunds