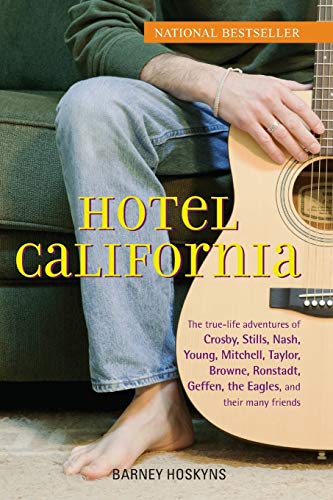 See more product information!
-
Save 11%
Before
₱ 1,339
Price Tracker
*Used item/s available. *Price and Stocks may change without prior notice
Pay with

About Hotel California: The True-Life Adventures Of

Product Description Hoskyns brings a genuine love as well as an outsider's keen eye to the rise and fall of the California scene. . . . This is a riveting story, sensitively told. — Anthony DeCurtis, Contributing Editor, Rolling Stone From enduring musical achievements to drug-fueled chaos and bed-hopping antics, the L.A. pop music scene in the sixties and seventies was like no other, and journalist Barney Hoskyns re-creates all the excitement and mayhem. Hotel California brings to life the genesis of Crosby, Stills, and Nash at Joni Mitchell’s house; the Eagles’ backstage fistfights after the success of ""Hotel California""; the drama of David Geffen and the other money men who transformed the L.A. music scene; and more. From the Back Cover "Comprehensive and lively, Hotel California offers a front-row seat on the wild ride—fueled by drugs, sex, and lots of cash—that took Southern California singer-songwriters from hot tubs and local bars to sold-out stadiums,private jets, and the bestselling album of all time." —Alan Light, author of The Skills to Pay the Bills: The Story of the Beastie Boys "Through hundreds of interviews conducted over the last dozen years, Hoskyns methodically chips away at the era's artifice and ego-driven mythologizing, revealing a creative landscape that was less stardust and golden than it was green with greed and white with cocaine residue."—Erik Himmelsbach, Los Angeles Times Book Review This book is a remarkable look at one of the most dramatic, creative, and revolutionary settings in American popular culture: the Los Angeles popular music scene from the late 1960s to the late 1970s. Drawing on extraordinarily candid firsthand interviews Barney Hoskyns has conducted over more than three decades, Hotel California takes you on an intimate tour—from the Sunset Strip to Laurel Canyon—of the creative and personal lives of the legendary songwriters, superstars, and producers who made the music that everyone listened to. You'll read things you've never read before about such fascinating, complex people as Joni Mitchell, Neil Young, Jackson Browne, Glenn Frey, Mama Cass Elliot, James Taylor, Linda Ronstadt, David Geffen, and many others. Packed with riveting anecdotes and sharp musical insights, Hotel California captures the amazing results of brilliant creative collaboration and the dark side of fame, wealth, and unbridled ambition. It is a story of rise and fall like none other, and you won't be able to put it down. About the Author British journalist Barney Hoskyns has spent much of his professional life in Los Angeles as a correspondent for England's New Musical Express and Mojo. He has contributed to Rolling Stone, GQ, Harper's Bazaar, Interview, British Vogue, and Spin. His other books include Across the Great Divide: The Band and America and Led Zeppelin IV. He is the cofounder and editorial director of the acclaimed online library Rock's Backpages at www.rocksbackpages.com.

Laurel Canyon: The Inside Story Of Rock-and-Roll's...

Before
₱ 1,226.00
Pre-order Item
I confirm to purchase this pre-order item.
Other Choices
Return Policy
For more details please visit our page about Cancellations, Returns, and Refunds