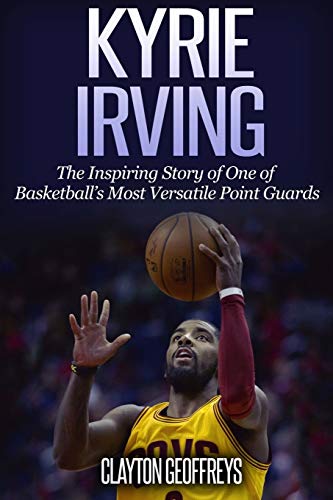 Kyrie Irving: The Inspiring Story of One of Basketball’s Most Versatile Point Guards (Basketball Biography Books)

About Kyrie Irving: The Inspiring Story Of One Of

Learn the Incredible Story of the Brooklyn Nets' Star Point Guard Kyrie Irving! Read on your PC, Mac, smartphone, tablet or Kindle device! One of many riveting reads in the Basketball Biography Books series by Clayton Geoffreys. Newly revised for the 2019-2020 NBA season, Kyrie Irving: The Inspiring Story of One of Basketball’s Most Versatile Point Guards details the inspirational story of basketball's star, Kyrie Irving. This unauthorized basketball biography of Kyrie Irving highlights his quick ascent into the league as a brilliant passer and scorer. Kyrie Irving, often referred to as Uncle Drew, rivals Golden State Warrior Steph Curry in his incredible ability to control the basketball. Youth basketball players from all across the world view Kyrie Irving highlight reels to learn the ins and outs of passing and dribbling the basketball. Having such extraordinary skills, Kyrie is one of the best point guards in the NBA due to his court vision and ability to pass and score incredibly quickly. His agility is easily among the best in the NBA. Now moving on from his two seasons in Boston, Kyrie will look to continue building on his legacy as a member of the Brooklyn Nets, playing alongside superstar Kevin Durant. Read on to learn about Kyrie Irving’s journey into the league, to his college years at Duke University before ultimately propelling into the NBA. This is the perfect basketball book to pick up for a weekend read, or to gift to your basketball fan as a present. Here is a preview of what is inside this Kyrie Irving biography book: Childhood and High School Years Training with Pyonin College Years at Duke Kyrie Irving’s NBA Career Getting Drafted and Rookie Season All-Star Appearances and the Return of Lebron Three Finals Appearances, Final Season as a Cavalier The Trade to Boston The Return, Irving’s Criticized Leadership Kyrie’s Personal Life Irving’s Impact on Basketball Kyrie Irving’s Legacy & Future An excerpt from this Kyrie Irving biography: In their early twenties, most people are just graduating college and seeking employment if not already working for a mediocre wage. Long before Kyrie Irving’s golden years were over, he had already become a multi-game NBA All-Star, recipient of the 2012 Rookie of the Year Award, the 2014 NBA All-Star MVP, and NBA Champion with the Cleveland Cavaliers. Kyrie went to the NBA Finals at the tender age of 24 while most NBA players retire without ever having a shot at the championship. However, he would tell you these accolades are par for the course. Irving abides by his father’s advice to “stay hungry and humble,” words driving Irving’s relentless work ethic both on and off the court. In a league dominated by incredibly talented point guards, there is no choice for ambitious athletes but to aspire to greatness. For Kyrie, his impeccable ball handling along with his knack for acrobatic finishes around the rim distinguish him third from his contemporaries.Irving’s game is decisive and crafty but maintains a degree of elegance. He keeps opponents guessing from the top of the key right down to the bucket. His impressive dribbling ability and superb ambidexterity allow him to keep defenses on their heels. While the 24-second shot clock is ticking, Irving’s repertoire of moves seems to be inexhaustible. If you enjoyed this excerpt, scroll up and pick up a copy of this Kyrie Irving biography today!

Stephen Curry: The Inspiring Story Of One Of Baske...