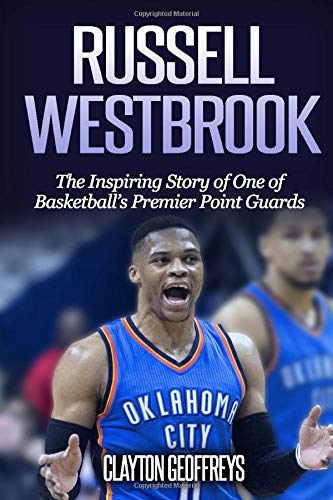 About Russell Westbrook: The Inspiring Story Of One Of

Product description Learn the Incredible Story of Houston Rockets' New Superstar Russell Westbrook! Read on your PC, Mac, smartphone, tablet or Kindle device! One of many riveting reads in the Basketball Biography Books series. Newly revised for the start of the 2019-2020 season, Russell Westbrook: The Inspiring Story of One of Basketball's Premier Point Guards details the inspirational story of basketball's superstar point guard, Russell Westbrook. Russell Westbrook's ascent into the top point guards in the NBA amongst the likes of Chris Paul and Stephen Curry has definitely been a surprise. From once struggling to make his high school varsity team (he did not make it until his junior year) to spending his freshman year at UCLA as a benchwarmer, few would have predicted that Russell Westbrook would be selected as the fourth overall pick in the 2008 NBA Draft. The rest is history as Westbrook has become a universally recognized superstar in the league, having led the Oklahoma City Thunder for many years. At the time of this writing, he has an opportunity to chase a championship as he reunited with his former teammate, James Harden. Russell Westbrook is easily one of the most exciting point guards to play the game of basketball. From flashy crossovers to high flying dunks, Russell Westbrook has a bright basketball career ahead of him. When Kevin Durant came down with a foot injury, Russell Westbrook rose as a primary leader for the Oklahoma City Thunder. In the first season since Durant's departure from Oklahoma City, Westbrook again rose to the occasion as he captured the MVP award while putting up forty-two triple doubles in the regular season, a historic record. It will be exciting to see how Westbrook's latest chapter in his career plays out with James Harden. More importantly though, it'll be interesting to see how Westbrook continues to mature as a leader. Don't delay, pick up your copy of Russell Westbrook: The Inspiring Story of One of Basketball's Premier Point Guards today! This is a perfect basketball biography book to pick up for basketball fans of all ages, or to gift to a friend. Here is a preview of what is inside this Russell Westbrook book: Early Life and Childhood College Years at UCLA Westbrook's NBA Career Russell Westbrook's Personal Life Russell's Impact on Basketball and Beyond Westbrook's Legacy An excerpt from this book on Russell Westbrook's story: Russell Westbrook cannot play for a contending team. He is selfish and makes bad decisions on the court. He takes the ball away from great offensive players like Kevin Durant and James Harden. He is just another athletic “me-first” point guard, and the Thunders would be better off without him. In a few years, he will probably follow the legacies of Stephon Marbury and Steve Francis, point guards from the early 2000s, who are as well-known for their careers’ spectacular crashes as they are for their actual play, or even their inclination to win ball games. NBA analysts have said this of Westbrook ever since he soared to superstar status, and such claims are not totally without merit. Westbrook will sometimes try to do too much. In Game 2 of the 2012 NBA Finals against the Miami Heat, Westbrook took 27 shots in comparison to 22 shots from Durant. However, despite taking more shots, Westbrook finished with only 26 points as opposed to 32 for Durant. The great Magic Johnson, who won five NBA titles, said, “That was the worst point guard in a championship series I have ever seen.”Tags: Russell Westbrook biography, houston rockets basketball, oklahoma city thunder, nick collison, paul george, kevin durant, james harden, lebron james, kyrie irving, stephen curry

Kyrie Irving: The Inspiring Story Of One Of Basket...